You are at:Home»Current in Fishers»Celebrate Indiana soccer’s past and future during Saturday’s clash with New York Cosmos 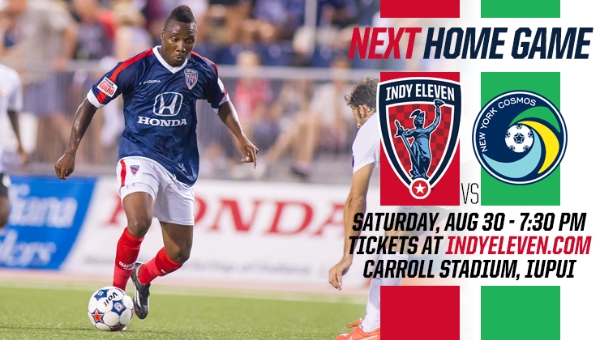 Don’t miss the only chance in 2014 to catch your Indy Eleven take on the defending NASL Soccer Bowl champion New York Cosmos this Saturday night at IUPUI’s Carroll Stadium!  With Indy Eleven going 9-for-9 in home sellouts you won’t want to delay in securing your spots at “The Mike” for the 7:30 p.m. kickoff.  Click here to secure some of the LIMITED seats available now for as little as $10 in the Brickyard Battalion supporters stand and East Goal Top sections.

While Indy Eleven represents the “present” of soccer in Indiana, the club will honor the state’s rich soccer tradition as part of Saturday’s “Indiana Soccer Heritage Night” festivities, which will include a halftime recognition featuring more than 30 players, coaches and administrators that helped build the beautiful game in the Hoosier State. In addition, Indy Eleven will join its partner Indiana Soccer in celebrating the next generation of the sport by kicking off Youth Soccer Month, including a “Parade of Champions” recognition featuring championship-winning teams and ODP program participants.