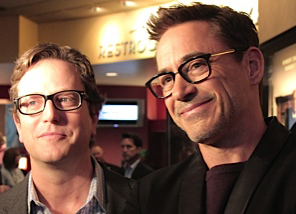 A- List actor Robert Downey Jr. known for “Iron Man” and “Sherlock Holmes” waltzed in the theater and shocked the paying audience on Oct. 4. Current’s film guru Amy Pauszek was there to meet him. (Photo by Danny Yount, of Carmel)

There was excitement in the air at the AMC Theaters on Oct. 4 when Hollywood came to Indiana. The 23rd annual Heartland Film Festival started off with a bang at a special party and advanced screening of Warner Bros. Pictures’ “The Judge.” Director David Dobkin told the sold out crowd that none of the film’s actors could attend the event but he brought along a producer. A- List actor Robert Downey Jr. known for “Iron Man” and “Sherlock Holmes” waltzed in the theater and shocked the paying audience. Heartland put a twist on the entire evening as both Dobkin and Downey attended the sold out screening, participated in a media press line and enlighten the audience with a wonderful Q & A that followed after the film.

“A powerful and entertaining film set in Indiana, ‘The Judge’ was a perfect fit to launch the 2014 Heartland Film Festival,” said President Stuart Lowry, “The surprise appearance from an actor of Robert Downey Jr.’s caliber shows that we have something very special here in Indianapolis. This was an amazing day for all the fans and supporters of the Heartland Film Festival. We want to sincerely thank Robert Downey Jr., David Dobkin and Warner Bros. Pictures for making this special event possible.”

”The Judge” is about high-powered lawyer Hank Palmer who returns to his childhood home to defend his estranged father after the death of his mother. His father, the town’s judge is suspected of murder. Hank struggles with the lost years, validation and approval he always longed for from his strict father. The film cleverly tries to bring together a broken family as Hank desperately searches for answers and the truth to save his own father’s destiny with the law. This is a beautifully written film that will make the audience laugh, cry and will tug at their own hearts. The acting, cinematography and music score flowed exceptionally well together and made the film a truly moving picture.

“The Judge” is a touching thought provoking film that will make one think about family, friends and unconditional love. This is a must see film. Yes, Thanks to the Heartland Film Festival… Hollywood did come to Indiana with a powerful new film that made a lasting impression. “The Judge” opened world-wide on Oct. 10. Check your local listings for theaters and times and go see this film.