You are at:Home»Current in Fishers»Column: No demand, no need, no more taxes 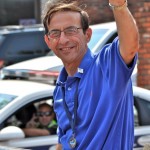 I just don’t understand why the mayors of Carmel, Westfield, and Noblesville are such big advocates of spending billions on a mass transit system for Hamilton County. The bus service currently being provided from Fishers and Carmel to Indianapolis has not attracted many riders and recently was subsidized by Fishers and Carmel taxpayers so it can survive until year end. If a city of more like 80,000 people like Carmel can only generate less than 60 riders for bus service to Indianapolis, how can Hamilton County support a mass transit system that will cost billions?

These mayors have failed to consider facts about the workforce and commute time to determine if a need exists for a mass transit system. First of all, well more than 50 percent of all workers today are women. According to most studies these same women are the major caretakers for children. So how are they going to get back to Hamilton County quickly and back to work to support doctor appointments, sports participation, and after-school activities using mass transit? Secondly, the commute to downtown Indianapolis is less than 40 minutes even in rush hour. So where are these prime caretakers going to get the extra time needed to drive to a transit station and for the mass transit ride time into Indianapolis? They have no extra time. Thirdly, with flex hours at almost all working locations, how can you accommodate the need to go in both directions at all times? Finally, there is a major trend for working at home which will continue to reduce the need to commute in any fashion.

The cost to operate mass transit system once the equipment is purchased is another issue. IndyGo only produces about 18 percent of the revenue needed from riders, while taxes ($33 million in 2013) made up 50 percent of their annual revenue. We have already seen several venues built in Hamilton County which require millions in taxpayer subsidies each year to operate. We don’t need another one.

In conclusion, I just don’t understand why the mayors and other elected officials like County Commissioner (Christine) Altman are denying the reality of the situation. It just makes no sense.h