You are at:Home»Current in Carmel»Carmel Community»Johnson Addition seeks to become conservation district 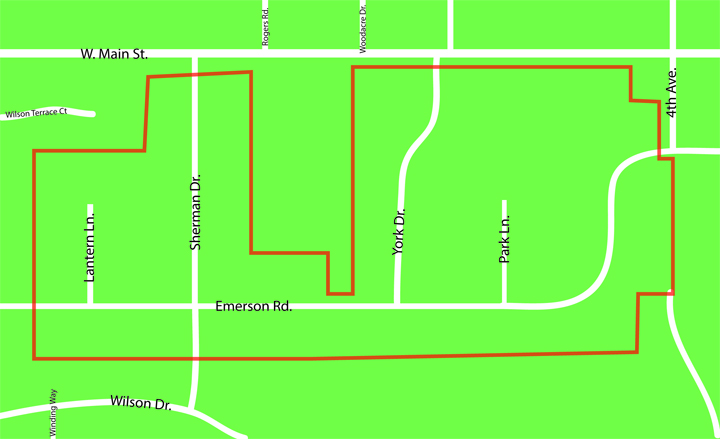 A map of the proposed conservation district shows the area that some residents want to protect. (Submitted image)

An older neighborhood near the Carmel Arts & Design District is seeking protected status as a “conservation district” in order to prevent large, out-of-place homes in its part of town.

The petition has sparked debate. Some residents said the petitioners don’t speak for the majority and they don’t want the red-tape associated with such rules.

Now it’s up to the Carmel City Council to determine, “the wishes of the majority.”

Many residents in the Johnson Addition neighborhood, which is south of Main Street, west of 4th Avenue and east of Guilford Road, have expressed concerns that neighbors could sell their vintage 1950s-style homes, demolish the mostly single-story dwellings and construct huge multi-story behemoths that could endanger the character of their beloved community.

“It’s the old neighborhood,” said Clay Township Trustee Mary Eckard, one of the neighbors who filed the petition. “We don’t want to see it change and we don’t want to move. You can’t recreate what’s been here for more than 50 years.”

While no developer is currently planning such a project, neighbors felt strongly enough to come to the Carmel Historic Preservation Commission to ask to become a historic neighborhood.

“We told them, you don’t want that,” said City Councilor Luci Snyder, a member of the preservation commission. “Nobody wants to live in a historic district because you can’t even paint your house a certain color. So we tried to advise them that a conservation district might be a better way to go.”

Neighbors submitted a petition to be a conservation district, and the board unanimously approved this petition. It will go before the City Council on Oct. 20.

If they are approved to be a conservation district, then after three years the neighborhood would automatically become a historic district unless the proper paperwork is filed to prevent that.

Although many neighbors have strong opinions about the conservation district, some residents claim they weren’t properly notified and that this is being forced upon them.

“From what it seems like there are five or six people who really want this and most people are undecided or against it,” said Michael Houser, who has lived on Sherman Drive since 2010. “But they just keep ramming it through. I just don’t think it’s necessary and it could hurt us in the long run. It is possible people won’t even do upkeep on their houses because they will be so afraid of all of the rules.”

Eckard, who disagrees with Houser, said she believes the rules won’t be Draconian. She said it will only mean that residents can’t move a house, demolish a house or make major alterations without consulting with the preservation commission. She said she also is confident that she has a majority.

“We have had well-attended meetings and we’ve gone door to door,” she said. “We’ve collected the signatures and we believe at least more than half – if not more – of the residents are excited about this.”

City Councilor Carol Schleif said she doesn’t take a side in the matter, but feels there is a lot of misinformation about conservation districts and that the rules aren’t as strict as everyone might think. And if there was a need for variance, she said the commission can vote to approve a new home, so there is room for common sense.

“It just puts rules in place, not much different from a homeowners association,” she said. “If the majority of the neighbors want to put these rules into place, I don’t have a problem with that.”

City Councilor Sue Finkam said there are many unanswered questions and she isn’t convinced that residents really know all that comes with a conservation district.

“I’m concerned that the neighbors haven’t been given a clear picture of what a conservation district means,” she said. “It could advance to a phase where there are much tighter controls. It’s not clear to me that most people understand that.”

Finkam said she isn’t sure why this certain area should be protected by the commission because, “it’s a lovely area, but it’s not historic.” She said there are other means to set rules, such as creating a neighborhood association or proposing that the City Council create an overlay district for zoning changes.

Most of all, Finkam is concerned about including homes on Main Street in this plan, which is currently the case.

“I do not agree with the boundaries they have set,” she said. “If any homes on Main Street are included I will not vote for it. They have a different character and street scape.”
Eckerd said that shouldn’t be a reason to vote against the plan, because that could be discussed. She even agrees that Main Street, “has a different feel and character than our neighborhood.”

Snyder said she is concerned that it might be difficult to decide what the majority wants. She said she’s going through the names on the petition and checking them against a list of the homeowners. She also encourages anyone to come speak at the Oct. 20 meeting so they have all the information they need.

“This isn’t something we’ve done before so we want to do our due diligence,” she said. “Do we need fifty one percent of the residents? Two-thirds? These are questions we are going to have to answer.”