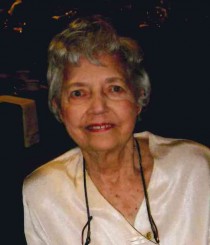 Carol J. Weinke Reifeis, 85 of Carmel, passed away Oct. 11.  She was born on September 9, 1929 in Indianapolis, IN daughter of Harry and Ethel Williams Weinke.  Carol attended the University of Louisville and Butler University.  Before retiring in 2008, Carol worked as Office Manager for her son, Paul’s dental office.

In addition to her parents, Carol was preceded in death recently by her husband, Otto.

Family and friends will gather on Oct. 21 at 10 a.m. in the Carmel Lions Club, 141 East Main Street, where the Memorial Service will begin at 12 p.m.  A private inurnment will take place at a later date.

In memory of Carol, memorial contributions can be given to the Lions Club International Foundation, P. O. Box 1021, Carmel, IN  46032.