You are at:Home»Current in Carmel»Carmel Community»Carmel Theatre Company looks to ‘Wales’ for holiday production 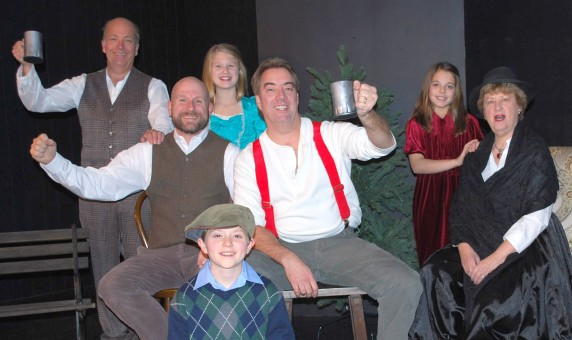 When Carmel Theatre Company leaders sought a unique stage production for this Christmas season, they were eager to find just the right play. They think they have it in “A Child’s Christmas in Wales,” based on the Dylan Thomas short story with musical adaptation by Jeremy Brooks and Adrian Mitchell.

“When I heard (CTC board members) June and John Clair were looking for a family-friendly holiday production, I decided to see if I could find a Christmas story that wasn’t the same retelling of Scrooge’s misadventures or holiday pageants gone awry,” said Pam Kingsley, a fellow CTC board member and past performer who is directing this production. “‘A Child’s Christmas in Wales’ is a funny, charming, magical musical adaptation of the Dylan Thomas short story that is truly made for all ages to enjoy. The music is absolutely wonderful, packed full of familiar holiday tunes and some beautiful Welsh songs.”

Thomas, better known as a poet from Wales, wrote the short story in the 1940s and recorded an audio version in 1952, a year before his death. Since then, it has been turned into a stage production and film. The story is a fictional autobiographical account of a man remembering his Christmas those around him as a youth. The CTC said it believes this may be the Indiana premiere of the musical, calling it “a warm, nostalgic story filled with all the good things of Christmas, which will conjure up memories of family Christmas celebrations the world over.”

Dalyn Stewart, a 12-year-old home-schooled student from Westfield, stars as young Dylan. Stewart has been performing since he was 8 through the Wisdom Builders home school co-op he attends and in church camp shows, but “A Child’s Christmas in Wales” marks his CTC debut. “I just love getting in front of people,” Stewart said of his affection for performing. “I love the singing, the acting, everything about it.”

Stewart wasn’t familiar with the play before auditioning, but he has been immersed in it ever since.

“I like the storyline of it, how the adult Dylan is basically telling the story in his mind and it’s playing out on the stage,” Stewart said. “I love the humor, the fun, I love the enthusiasm. It’s a family, loving, fun, adventurous play of a boy that has the best Christmas ever.”

Rick Sharp, who in real life serves on the Carmel City Council and began performing in local theater at age 50, returns to the stage as the adult Dylan narrating the show. Sharp said the role is “both challenging and fascinating.”

“The challenging part is I only interact with the cast once,” he added. “We were joking the other night about it and I said, ‘It’s almost like I’m in a completely different story.’ The part that’s fascinating is the language. The richness and variety and the phrasing that Dylan Thomas used in writing this is just amazing. It’s language as an art, which we don’t practice so much in the 21st century. That presents some of the challenge because … I (have to be) careful to convey the meaning of the words as well as the sentiment.”

The cast consists of 21 actors and singers, most from Carmel, Westfield and Zionsville. Carol Keddington serves as musical director. Show time is 7 p.m. for Thursday, Friday and Saturday performances and 2:30 p.m. Sundays. Tickets are $18 for the general public, $12 for students 12 and under and seniors 62 and over. Group discounts are available. To make reservations, call 688-8876. Visit CarmelTheatreCompany.com for more information.