You are at:Home»Current in Carmel»Carmel Community»Carmel’s Donut 5K aims to be one sweet race 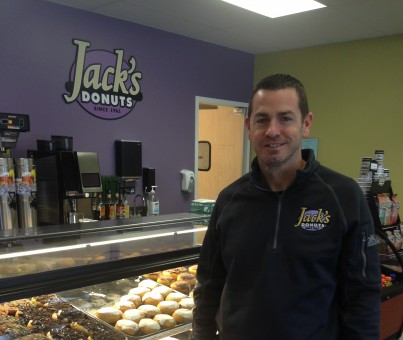 Owner of Jack’s Donuts, Eric Patton, is supplying doughnuts for the Donut 5K in Carmel on Dec. 20. (Photo by Adam Aasen)

Runners often look for extra motivation to push through a course.

Organizers of Carmel’s Donut 5K hope that some sweet treats at each water break will get people moving for their favorite frosted fuel.

“The extra little sugar will give you that extra boost from one mile to the next,” said Eric Patton, owner of Jack’s Donuts.

The event is scheduled for 9 a.m. on Dec. 20 at the Monon Community Center. Registration costs $30 and complete details can be found at www.carmelroadracinggroup.com.

Todd Oliver, president of Carmel Road Racing, said it’s the eighth year that his group has put on this holiday 5K event, but he had the idea to team up with Jack’s Donuts to make it fun and increase attendance. So far, it’s worked. He has about 500 people registered which puts them on pace for about a thousand runners, a record for this course.

The Donut 5K is part of a trend in the running world where a “gimmick,” so to speak, makes a race fun for a broader audience. Sometimes it’s a goofy sweater or costume. There are color runs and zombie runs in many areas. Oliver said these kind of runs can be fun, which is why they are giving out Santa hats and beards to the first hundred runners.

“I’ve heard about 10 times in the last month that people say, ‘I’m not a runner, but I did a beer run or a chocolate run and I kind of had fun, so now I’m coming out and doing more runs,’” he said. “So, even though they are gimmicky, if they help get people active, then that’s cool. Because you can be silly and have a good time and still break a sweat.”

At the same time, the Donut 5K won’t be unappealing to seasoned runners. It’s still a state championship race, which means they pay a cash purse to the winner, Oliver said.

Oliver is also looking at planning for this spring’s fifth annual Carmel Marathon. Registration is already trending six percent more than last year’s numbers. One factor that Oliver thinks will boost attendance is a new bib. This year, marathon and half-marathon runners will receive Olympic-style running bibs with their names on it instead of just a number. Oliver said this will make for a nice keepsake.

“I’ve already got emails saying, ‘This is going to be my first marathon. How cool!’” he said. “I’ve got people telling me that they already picked out a frame for their new bib, so it’s pretty exciting.”