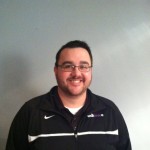 What is your favorite restaurant?

“My favorite restaurant around here is in the Broad Ripple area. It’s called Delicia and it’s amazing. It’s a South American and Latin fusion. We’ve sent several people there, and they were all thoroughly impressed.”

What is your favorite movie?

“As a guy with a video production degree, I have lots of favorite movies, but some would include ‘Star Wars’, ‘Braveheart’, ‘The Ten Commandments’, with Charlton Heston, ‘Tombstone’, and ‘The Shawshank Redemption.’”

What is your favorite book?

“I used to say ‘A Brave New World’, by Aldous Huxley, but I haven’t read it in years.  I also like ‘Peter and Max’, by Bill Willingham.”

If you could go anywhere in the world, where would you go and why?

“I have always wanted to go to Scotland and see the landscape, take my camera, and take tons of pictures and video.”