You are at:Home»Current in Carmel»Carmel Community»Local Muslims speak out against terror, still plan on new Carmel mosque 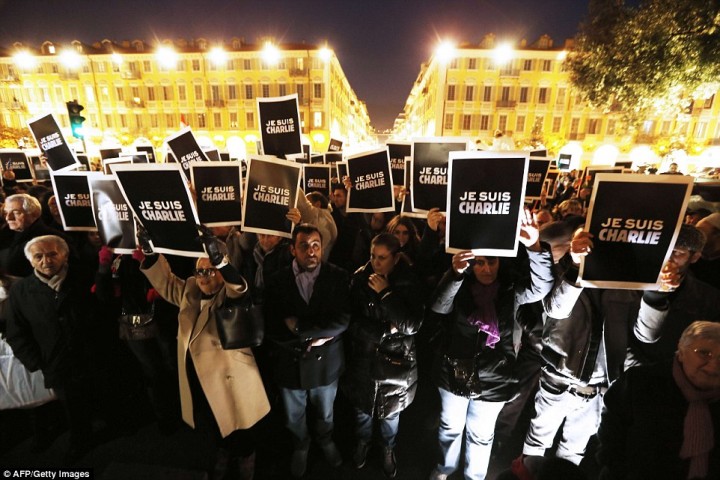 Muslim and Jewish protestors gather in the streets of Paris after the Charlie Hebdo terrorist attack. Carmel Muslims say they are ‘excited’ for their new mosque and condemn terror on all levels. (Submitted photo courtesy of Daily Mail U.K.)

When Islamic terrorists shot and killed 12 people at a French satirical newspaper earlier this month, it helped to fuel international fears about Muslims in some communities.

Here in Carmel, some people might say they don’t know very many Muslims. Most of what they know comes from watching TV.

But local followers of Islam want to help increase awareness to change any misconceptions. One positive step will be the construction of a new mosque in Carmel.

“Once people know there’s a mosque in their neighborhood, they will realize that there are Muslims in the area it will encourage people to know more about the religion and the people who follow that faith,” said Muzaffar Ahmad, spokesman for the Ahmadiyya Muslim Community in Hamilton County.

The Al Salam Foundation, currently based in an office suite at the corner of 96th Street and Michigan Road, continues to plan to build a full-scale mosque in Carmel. Multiple phone calls to Al Salam for comment were not returned.

Ahmad is not involved in the new mosque, but he said everyone in Hamilton County is buzzing with excitement about the new facility.

“Whenever there’s a new mosque opening in the area, the Muslim community gets excited,” he said.

He said he understands a certain level of outreach will be needed when the mosque opens.

“Unfortunately when there’s a new mosque opening in an area, there’s a certain level of discomfort,” he said. “People start to have strange thoughts in their minds related to terrorism and fears about what they don’t know. So I always tell people it’s best to go and talk to some of the people.”

As for those who are angered by the attacks in France, Ahmad wants you to know he’s just as angry.

“Being a Muslim myself, it’s pretty frustrating,” he said. “You don’t want to see people killing people in the name of your religion. I would have to say that these people aren’t really Muslims. They claim to be, but they are just extremists and terrorists and murderers. It would be better if they had nothing to do with our religion.”

Where will the Carmel mosque be?

Officials from Al Salam Foundation for Muslims told Current they are “currently at the stage of acquiring a property,” and that at this point they “won’t be able to give any details.”

Plans for the new mosque must go before the Carmel Plan Commission and subsequently the city council, at which time they will become public knowledge.