You are at:Home»Current in Carmel»Carmel Business Local»Baltz blends talents with Mathnasium 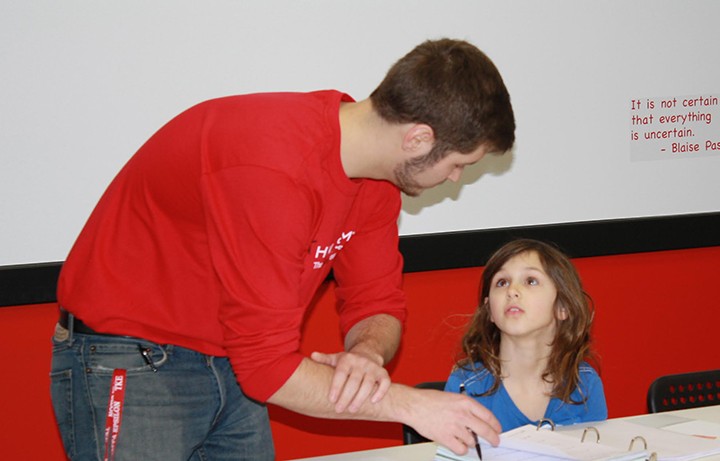 Brett Baltz figured he could not have asked for a better job than his position as Carmel High School math teacher.

“I was perfectly happy at Carmel,” Baltz said. “It was the best year of teaching experience I’ve had. It was fantastic.”

Baltz had no desire to leave until he learned about Mathnasium, a tutoring center. So after one year, the Carmel resident resigned from his job in July. His Mathnasium center opened on Jan. 5 at 365 W. 116th St., Suite 130 in Carmel.

“In both of these positions I learned a great deal,” Baltz said. “I enjoyed managing the operations, quality, staff and guests. I was highly involved with training and development.”

Prior to taking the Carmel job, Baltz was a Lawrence North High School math teacher for several years.

Baltz said there are a few things that make Mathnasium a unique tutoring facility. First is it’s math, only.

“One is it’s math only,” Baltz said. “Two is the that environment is a little more active and a little more fun. We employ some different math games to work on with students. Our instructional method isn’t necessarily one-on-one where you are tied down with a tutor for an hour. The instructors bounce around from student to student as they have questions and needs. We allow the students to work independently and we feel strongly that is an important part for them building their confidence. I think the most important thing about Mathnasium is the curriculum. It’s a brilliant curriculum.”

Baltz said it follows his belief in developing number sense in students to give them a fluent relationship in understanding how numbers are related to each other. Baltz said when the students’ memory of math facts and algorithms fails them, they will have better ways of solving problems.

When the students come in for the first time, they are given an assessment to identify the student’s current level.

“We develop an individualized learning plan based on that first assessment,” Baltz said.

Mathnasium is one of approximately 550 franchises in the United States. There is one in Indianapolis and one that opened in Fishers last year. The age range for the curriculum runs from second grade though high school. Baltz employs three part-time instructors.

“Students attend Mathnasium at their convenience to work on their individualized learning plan and address homework questions,” Baltz said “There are no appointments necessary, and we never send work home with the students.”

All of the work takes place in the center under the direction of the instructors, Baltz said.