You are at:Home»Current in Fishers»DeVeau sends 200 to ‘Circle’ 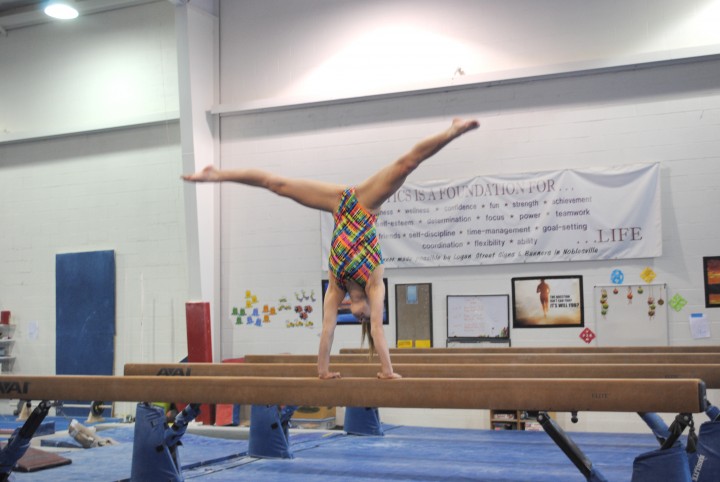 Mia Lord practices on the beam (Photo by Mark Ambrogi)

Hamilton Southeastern High School sophomore Mia Lord can’t remember a time when she has come to DeVeau’s School of Gymnastics.

“It’s (gymnastics) always been my whole life and I love doing it,” said Lord, whose mother Paula Lord is a DeVeau’s coach.

Lord was one of about 200 girls from DeVeau’s School of Gymnastics competing in the three-day Circle of Stars Gymnastics Invitational at the Indiana Convention Center in Indianapolis on Jan. 30-Feb. 1.

“There’s a lot of people that come out so it’s good to see all the gymnastic teams that come out and the skill level (of athletes) that comes out,” Lord said.

“It’s grown to be the largest gymnastics competition in the county,” Strange said. “We had 4,500 athletes participate this year. We had clubs as far away as Texas and one from Georgia.”

The invitational, which offers free admission, is run by DeVeau’s booster club.

“It’s great having my friends locally come to see me because a lot of our competitions are out of state,” Stephenson said. “This gives us a good opportunity to promote what we do to the people around us that don’t get to see it all the time. It’s definitely a lot of fun having my family coming to watch.”

Stephenson said the meet is earlier in the season so there isn’t much stress involved.

“There is not a lot riding on it,” he said. “It’s more just going out there and showing off what we’ve learned over the past year.”

Stephenson, who has received a scholarship to compete in gymnastics at Nebraska in 2015-16, finished second in the all-around in the age 17 and older age group (Level 10). Stephenson, whose older brother Chris is a sophomore gymnast at Nebraska, was first in vault, rings and parallel bars.

Lawrence Central High School senior Rebecca Green has competed in the Circle of Stars since she was six years old.

“There are a lot of good gymnasts and good teams that show up. The quality of athletics there is amazing. It’s a good place to learn if you don’t know about the sport.”

“My goal is to make it to the Junior Olympics nationals again this year,” Lord said. “It was one of my favorite gymnastics experiences.”

Lord will have a chance to qualify for nationals at the regional meet at the end of April.