You are at:Home»Current in Zionsville»Eagle student finishes fifth in state chess competition 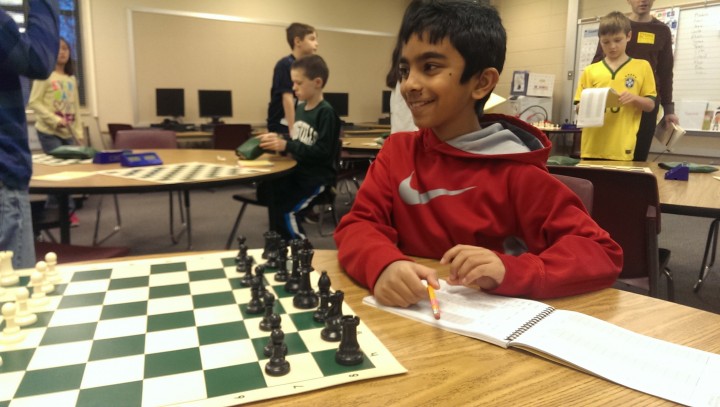 Zionsville third grader Naitik Rambhia recently finished fifth in the Scholastic Chess of Indiana state championship out of more than 300 students for the third grade and under division. Naitik competed in a field of 64 students who qualified for the finals, including his classmate, Allie Johnson, who finished 48th in the state.

Naitik and Allie attend Eagle Elementary where they participate in the school’s chess club and are part of the competing arm of the club’s team. This was Naitik’s third year competing and second time to reach the state finals, finishing 16th last year. It was Allie’s first year at the state level after competing for two years.

“I’m really proud of the work and effort Allie and Naitik put into the regionals and finals,” said Michael Johnson, chess club leader and Allie’s father. “My goals for them for next year are the same ones we have for all our players at Eagle: keep practicing, keep improving and keep having fun.”

Johnson been teaching chess at the school for four years. He has been grateful for the support from the PTO and the school. He has seen that support in cafeteria banners cheering for the chess team, in the purchase of quality chess sets and the acquisition of time clocks that are necessary in competition.

Naitik enjoys playing chess, but his favorite thing about competing?

“I like getting to meet new people and playing them,” he said.

When reflecting on her first state competition, Allie said, “Everything was fun, except the losing part.”

Naitik and Allie will be on one of the three Zionsville chess teams heading to the team regional competition in late February, but they feel that the individual tournament has already given them an edge.

“I feel like I’m better prepared to help my school team at regionals,” Allie said.

Scholastic Chess of Indiana is the sanctioning body of the US Chess Federation, running individual and team championships for the state. During the individual tournament 1,528 games of chess were played in seven different sections, with $4,000 in scholarships awarded.