You are at:Home»Current in Carmel»IU Health builds China-Japan relationships 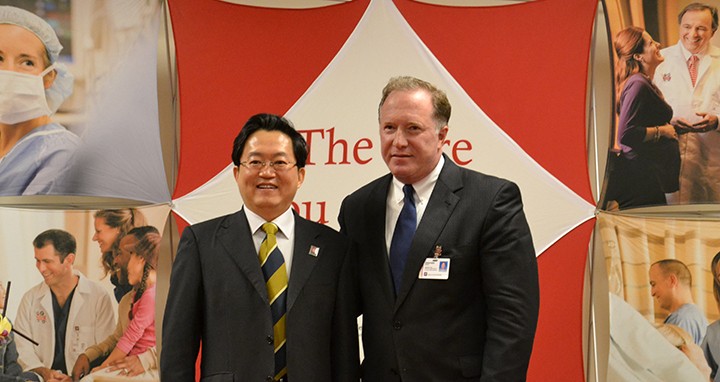 China and IU Health? Yes, they’re half-way around the world from each other, but two hospitals – one in Beijing and one in Carmel, Indiana – have developed a close connection.

In the summer of 2013, Jon Goble, president and CEO of Indiana University Health North and Saxony hospitals, received a call from Dr. Xu Shugiang, CEO of the China-Japan Friendship Hospital in Beijing. Dr. Xu was interested in bringing a group of hospital executives to the United States to learn about combining technology with health care. At that time, the Chinese health care system was not well coordinated in terms of integrating digital solutions across its national hospital system, but Dr. Xu knew it was needed. To begin that process, he and his team researched several hospitals and found that, along with Massachusetts General Hospital, Texas Children’s Hospital and others, IU Health is one of America’s most wired health care systems according to The American Hospital Association’s annual Most Wired Survey. Knowing that, he reached out to CEO Jon Goble, and scheduled a visit that November.

When Dr. Xu came to the U.S., he brought with him three other hospital leaders and an interpreter. The group met with Goble to learn about IU Health North’s culture and the role of technology in the patient care environment. In order to provide the best information, Jon brought in two IU Health North leaders, Terry Baker, then manager of Information Systems, and Janis Watts, director of clinical operations. Baker and Watts explained the hospital’s use of technology from the infant abduction security system to the barcode scanners for medication and armbands. By the time Dr. Xu and his team left, they had been exposed to many components of the technologically advanced environment of IU Health North Hospital, and they were impressed and excited about taking their newly acquired knowledge back to China.

“While Dr. Xu and his team were here, we signed a Memorandum of Understanding to create a more formal and ongoing partnership between our hospitals,” Goble said. “Our hope was to mutually benefit by sharing best practices and learning from each hospital’s successes and challenges.”

Following the signing of the MOU, Dr. Xu invited Jon to be the keynote speaker at the Digital Hospital Construction Summit Forum in Xi’an, China, in August. Of course, Goble accepted and began to plan his Chinese excursion. Then, in August 2014, as the keynote speaker for the upcoming Forum, Goble flew into Beijing as the guest of the Administrative Health of China. During his stay, Goble toured Beijing, experienced the impressive Great Wall, and for the first time, toured the 1,500-bed China-Japan Friendship Hospital where most of China’s dignitaries receive care. During the tour and in talking with the hospital’s leaders, Goble learned that patient satisfaction was not a high priority in the Chinese health care system. However, in his one-hour keynote speech at the Digital Hospital Construction Summit Forum, leaders from the 500 hospitals attending (in person or via teleconference) heard Jon repeatedly emphasize the importance of treating patients individually and providing personalized care, a message that had a strong impact on its audience.

“On the day of my presentation, I practiced my talk in the car with the translator,” Jon said. “We had to ensure the translator knew what I planned to say and how to convey the intent of my message, and we also had to practice the pauses for translation to ensure that the presentation would flow as smoothly as possible.”

Soon after Goble returned home to the U.S., Dr. Xu reached out asking him to host another delegation from the China-Japan Friendship Hospital. Having heard Goble speak and learning about Dr. Xu’s visit to IU Health North, more of their leaders wanted to experience the same culture and technology that Dr. Xu had experienced in 2013. So, on Nov. 16, five members of the China Japan Friendship Hospital’s leadership team, including the CFO, director of information technology, financial and IT planners, and an interpreter, arrived at IU Health North Hospital.

So, you may ask, what value do Goble and IU Health North Hospital see in building a relationship with the China-Japan Friendship Hospital? Well, truthfully, international relationships – even ones with China – are not new for IU Health. In October 2012, Jon Goble was present at the opening ceremony for the Sino-US Diabetes Clinic in the Zhejiang Province, a project that resulted from a partnership developed though IU Health’s former Clarian Health Ventures. These types of partnerships offer opportunities to strengthen relationships between countries and learn from each other, and IU Health North’s partnership with the China-Japan Friendship Hospital does just that. Jon offers an interesting perspective:

“Overall, regardless of language, payment system or government, the challenges to our hospitals are the same – to provide top quality health care and make a difference to the patient. We must all focus on the health of the patient and not get distracted, and together we can make each other better at serving our patients well.”

Though IU Health North Hospital and the China-Japan Friendship Hospital don’t currently have any visits scheduled for 2015, the partnership persists with opportunities for continued collaboration in the future.