You are at:Home»Current in Zionsville»Village Kitchen to bring family-friendly dining to Main Street space 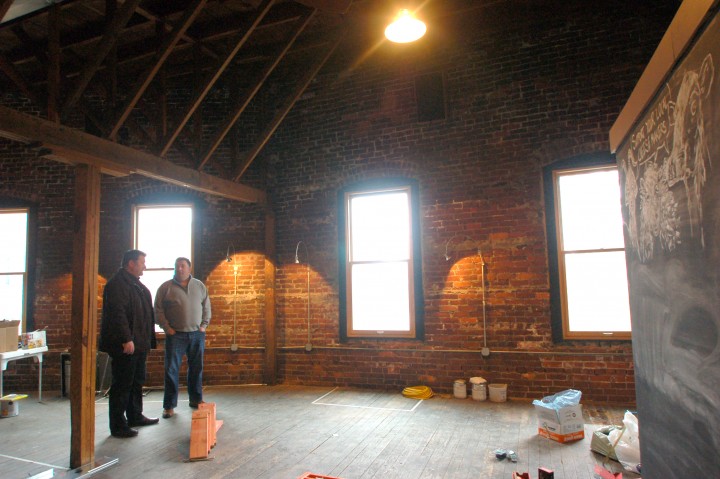 When Bryan Avery and his wife went looking for the right spot to open a small restaurant, they knew that they had found a perfect fit as soon as they got a look at the space that formerly housed Plum’s Upper Room. They loved the potential the saw as they looked out the windows onto Main Street.

“I thought, ‘This could be the coolest, hippest place in the world,’” Avery said. “And I don’t say things like ‘coolest’ and ‘hippest.’”

Their initial plan to apply a few coats of paint and open quickly changed once they removed all of the old furniture. Avery realized that it would take a little more effort to turn the space from a simple cafe to something more. After several months of discussing how to best use the layout, work to rebuild the space as Village Kitchen began in January. Avery hopes to have Village Kitchen open by early April.

The design will incorporate elements of the 150-year old building, like the exposed brick, wood beams and hardwood floors, with industrial steel furnishing and a visible stainless steel kitchen.

“I love the energy of what an open kitchen provides,” said Avery, who lives in Carmel.

Village Kitchen is developing as a “repeatable concept” with plans to open more locations in the area, Avery said. He is trying to include elements at the restaurant’s first location that are both functional and can be replicated elsewhere.

The Boston native has spent his career working in restaurants and food trucks. His goal for Village Kitchen is to create a family-friendly space and find ways to engage the community.

“We want this to be a safe place for families to enjoy themselves,” he said.

The family-friendly atmosphere can be seen in his staff, as his niece is moving to the area to act as general manager and his wife is planning to be involved as well.

The restaurant will have a walk-up counter to place orders and include self-serve beverage areas and space to seat between 50 and 65 people.

The breakfast menu will feature 12 flavors of homemade bagels and include pancakes, waffles, eggs and other staples. Sandwiches will fill the lunch menu along with customizable salads featuring 15 topping options using ingredients from local vendors when possible. Dinner will feature several items from the lunch menu but also include larger dishes such as spaghetti and homemade meatballs. A beer and wine license is pending.

Village Kitchen will serve breakfast and lunch Tuesday and Wednesday with breakfast, lunch and dinner served Thursday through Sunday. The restaurant will be closed on Mondays. Learn more at www.facebook.com/VKZionsville.