You are at:Home»Current in Carmel»Carmel Community»Pearson Ford to host March Make-A-Wish Month Fundraiser 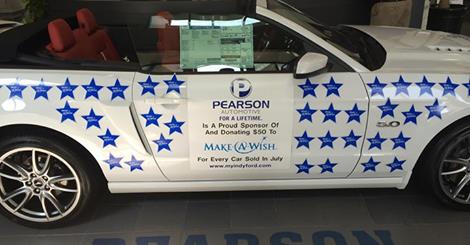 March is here, and for one local car dealership, that means it’s Make-A-Wish Month.

Pearson Ford in Zionsville is promoting its work with the Make-A-Wish foundation. For every car sold in March, they will donate $75 to the charity. Each time a car gets sold, a car displayed in the showroom will get a blue star placed on it.

The dealership has worked with Make-A-Wish for the past five years. Last year, Pearson Ford raised more than $13,000 in a month and a half. This year, their goal is $12,000 in one month.

Make-A-Wish is a group that is near-and-dear to nine-year general manager Ben Weir.

“It’s a really, really well-ran organization that obviously helps children, so to see those kids get to fulfill a dream and then get the letters that they write back to you about going on a Disney cruise and they’ve never seen the ocean before, things like that, it’s pretty special,” Weir said.

Customers can donate to the cause as well, either by making a donation at the dealership or tacking it onto the sale price of the car they buy. In a special case last year, one of the dealership’s business partners, Ally Financial, donated $1,000 to Make-A-Wish.

“It’s something that’s been our mission statement, I guess. When we feel like it’s the right organization, we’re going to do as much as we can for them,” Weir said.

Pearson Ford is at 10650 N Michigan Rd, in Zionsville.