You are at:Home»Current in Carmel»Carmel Business Local»Giant Eagle to open Market District location in Carmel this fall 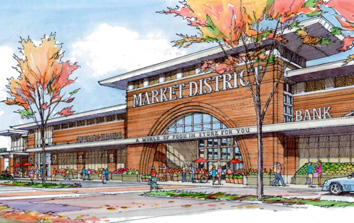 A rendering of the new Market District. (Submitted photo)

Pittsburgh-based supermarket chain Giant Eagle Inc. has decided to break into the Hoosier market with a new location planned for The Bridges community in Carmel.

Called The Market District, the store should resemble, “open-air markets of Europe, combining the best of the everyday grocery needs with unique offerings and services not found elsewhere.”

The location, not too far from 116th Street and Spring Mill Road, will feature a more than 100,000-square-foot store along with a GetGo convenience store and gas station.

The Carmel City Council previously approved the plan. The store is scheduled to open sometime in 2015.

“As we look to become contributing members of the Indianapolis area, we are also actively evaluating opportunities for additional locations,” said Giant Eagle, Inc. CEO Laura Karet in a prepared statement.

Giant Eagle is the 49th largest supermarket retailer in the county and many out-of-town transplants have expressed excitement about the chain moving to the area. They have more than 400 locations nationwide, but The Market District is one of their more upscale stores, aimed at affluent communities with amenities such as a smoothie bar and a wide selection of healthy and organic foods. The Carmel location would be the twelfth location of The Market District, which was launched in 2006.

The City Council approved The Bridges planned unit development in 2011 to be, “a unique, mixed use project with restaurants, services, retail, office and residential.” Since approval, two sites have been developed: a CVS and a retail building at the north end of the property. A Latter Day Saints Church is being built on the west side of Spring Mill Road.

Much of the past discussion about The Market District was about keeping its design in line with The Bridges prairie-style architecture, but city planning officials reported they were “impressed” with the look.  Giant Eagle has planned for 894 vehicle parking spaces, far more than what is required.