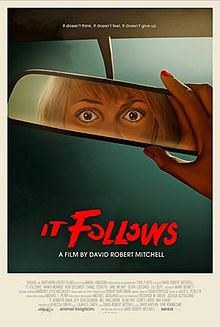 Low budgets can breed great horror. There’s a lot of creative freedom, but without all of the big budget tricks, you have to find innovative and intelligent ways to structure your story and find the scares. It Follows has garnished a lot of praise in the film festival circuit as being one such film, but does it live up to the hype?

Taking place in modern day Detroit, the movie follows Jay (Maika Monroe), a girl in her late teens, as she starts dating Hugh (Jake Weary). After sleeping together for the first time, he tells her that she is now being followed by an entity that can look like anyone and if it catches you, it kills you. The only way to save yourself is to pass it on by sleeping with somebody else. The film’s unique blend of 80’s slasher style and a 50’s monster film “it’s coming to get you” vibe was truly unique, simple and at times very effective.

The film acts as a metaphor for STDs, sexual abuse and moving forward from such things and is loaded with other symbolism for sexual awakening, but it’s anything but subtle. After a certain point you might find yourself saying “I get it, lets move on.” However, the greatest downfall of the film is it’s pacing. Slow building tension is a wonderful tool for horror films, but there is a difference between having interesting developments in the story, and dragging out scenes and shots to increase your runtime.

It Follows has a lot going for it and it’s easy to see where it got the attention. It’s gorgeous cinematography, interesting take on the genre, strong soundtrack, and some creepy moments are worth noting for sure. Unfortunately, it’s flaws creep in far too often to make it truly effective and in the end, make it a slightly artsy film with a little bit of horror thrown in.