You are at:Home»Current in Zionsville»Zionsville considering changes to Creekside Corporate Park zoning 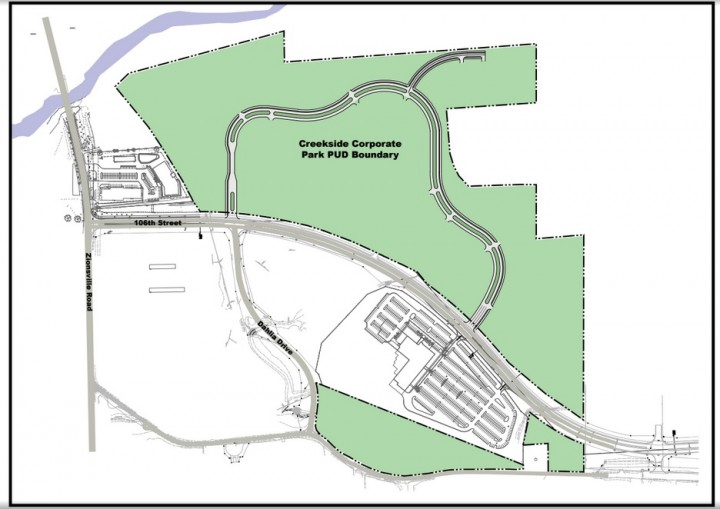 The Town of Zionsville is considering zoning changes to 75 acres of town-owned land in Creekside Corporate Park that would be more restrictive than the current uses allowed in the Planned Unit Development, which was adopted in 2011. Proposed changes also call for the addition of park amenities, including walking trails and half-court basketball, on a small portion of the site.

Since approving the original PUD, the town has gathered additional information on the market, topography and drainage at the site, which is along 106th St. east of Zionsville Road. The town’s redevelopment commission – which purchased the land from Dow Chemical Company through a partnership with Zionsville Community Schools in May 2013 – does not want to fill in the wooded ravines and level the area, actions that were assumed to take place when the original PUD Ordinance was originally adopted.

“We are requesting to rezone from a PUD to a PUD to reset the document,” said Wayne DeLong, Zionsville’s director of planning and economic development. “There are actually less uses, actually downzoning from what is permitted right now. The town is proposing to reduce it down to one singular lot which will have the ability to be a commercial component to it. The town wants to see the PUD fine-tuned.”

The 75 acres proposed for rezoning does not include the Lids headquarters or property owned by Dow.

Brad Johnson, a member of the Zionsville Redevelopment Commission, met with residents of the nearby Zionsville Village Residents Association in March to discuss the proposed zoning changes.

“I felt like our group was positive about preserving green space areas and some of the natural topography, as this approach would provide a more aesthetically pleasing end result for the property as a whole,” ZVRA secretary Todd Rech said. “The addition of walking trails might influence more walking traffic into the Village during lunch hours which would certainly assist our downtown businesses.”

The Zionsville Plan Commission was scheduled to discuss the zoning change at its March meeting but delayed the public hearing until the April 20 meeting.

“We wanted more time to prepare,” DeLong said. “We’ve been out pounding the pavement, meeting with adjoining land owners and interested people. We don’t want to come to the planning commission without making sure we’ve spoken with everyone who has expressed an interest to speak with us. We are looking for input and are under no time pressure to act upon this matter.”