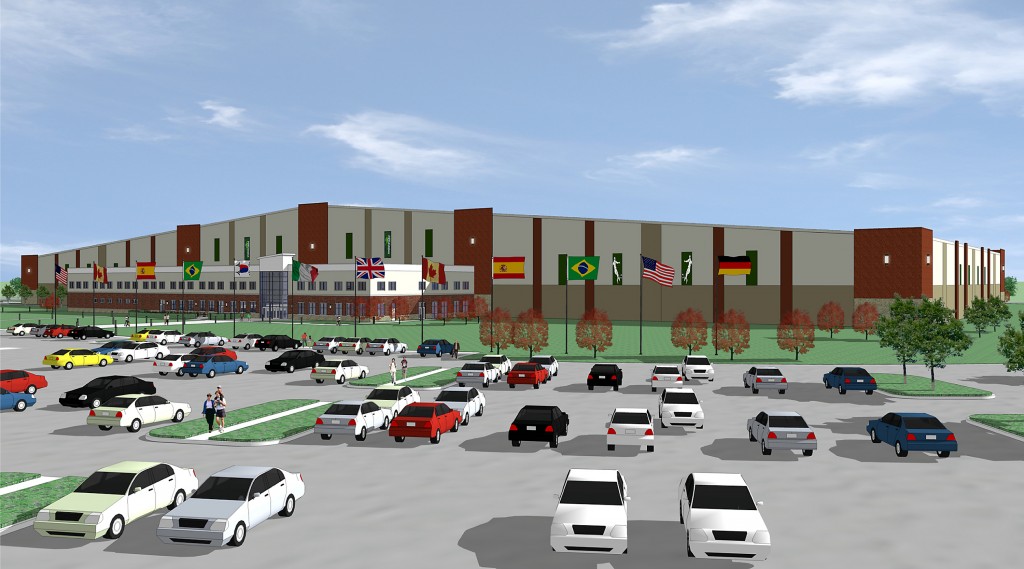 The proposed indoor sports facility will allow soccer games to be played year-round at Grand Park’s Sports Complex, which currently has 31 outdoor fields along with 26 baseball diamonds. (File photo and rendering)

With Westfield’s good fortune any community in the country could have built our new industry, but they didn’t. Our leadership working with experts in the sports’ and tourism industries along with municipal economist, recognized its potential as an economic magnet. We beat the world to it – now 26 baseball/softball diamonds, 31 multi-use/soccer fields, by next fall three indoor multi-use fields with locker rooms, restaurant, observation decks, store and conference rooms. This fantastic stadium will be able to host good sized conventions. We’re also getting a private field-house for baseball and volleyball. This Grand Park has already, in its first partial season, attracted enough neighboring assessed value investment to pay nearly a third of the tax revenue necessary to service the city’s outlay – and it’s only beginning.

I’m writing this because there are a few detractors trying to undermine our opportunities. They are using fictional math to make their points. You’ve all known people who say anything to oppose an idea because it wasn’t their idea. Please be wary of this handful of folks with big voices. They have never attended the open discussions that they could have and they do not know what they are talking about. The council knows that the cash flow will be there. They know that under state law residential taxes cannot go over the 1 percent cap unless you again vote for a referendum. If you missed the detailed facts, the mayor’s chief of staff (Todd Burtron) will explain how to access them as he did for me.

I’ll come back to explain why Westfield has become such a highly respected community in national media. First full disclosure: I speak as a citizen. I have no financial nor fiduciary interest in Grand Park nor other city undertakings. I do serve without pay the Westfield Arts Alliance, the Grand Junction Task Group, WeCAN, the Sports’ Commission (the first several meetings were held in our living room) and the “Hoover Ordinance Commission” that advises the staff. I attend most city council and plan commission meetings. I know the players. I write this to inform of Westfield’s great opportunities already bearing fruit that a few others just don’t get – perhaps because it wasn’t their idea – perhaps because they never applied themselves for the years necessary to put together a working plan and make the hard decisions. You deserve to rejoice and to be happy to live and work and play in Westfield, Ind. You deserve to be proud of this, your community.

Let me attempt to explain how Westfield came to this opportunity. I served on our town council right after the millennial. It was my first experience in being active in government. From the inside I was exposed to less than good government. Westfield did not have an industry and none was in sight. We had a few excellent small and midsize companies and stores. We were a static old farm town not yet able to encounter the development that was coming like a railroad train. We had grown to some 9,000 population. Our zoning ordinances were out of date and asking for trouble. I pushed for trails (we had none), parks (we had only tiny Hadley Park) and open green space including horse farms. We were desperate for commercial development that paid their taxes without adding kids to the schools. The problem was that huge residential developments, for the most part, were what was coming. The council was so desperate for business many seemed to have an “anything-anywhere” policy. This was headed for a disaster for the schools and residential tax payers.

It took years but after terrible zoning decisions we were successful in waking up the electorate and getting thoughtful caring people to participate and take office. Paul Estridge and Carl Steel backed the effort to become a city to enable managed growth. So to my point; we now have great leadership in Westfield! Most of the city councilors have listened and are keen on what it takes to attract desired taxpaying business. Above all is Westfield’s great fortune to have found a business seasoned visionary for mayor. Andy Cook recognized early the greatest opportunity any community could wish for. It took positive thinking and drive to accumulate the right teams and investors to put it together. Andy is a natural born CEO. By definition a CEO is a leader who has a vision and communicates it well. A CEO has the will and nerve to stand by one’s principles and builds a team to manage the vision as if it were their own.

Andy Cook successfully worked out the details of what is one of the country’s greatest youth facilities. He did this like great CEOs do: he gathered around him great minds and he listened. It was Mike McDonald’s council in ’03 that managed our opportunity to put our ordinary water and sewer division together with a neighboring private water and sewer company. He and I sought advice from State Sen. Luke Kenley who responded “buy it if you can manage it like a business.” With new blood we got ‘er done. It was Andy Cook’s innate leadership to sell it at the right time with a huge profit. There was no reason to stay in the water business when private business could do it professionally. There was plenty of reason to repurpose that $91 million. As a result Westfield now has all its utility bonds paid off and still has huge cash surplus reserves. Cities all over the country are dismayed and would give their eye teeth for our blessings. Andy and his department directors know how to pick, train and organize these pros into a team on a rare level. It’s actually amazing to witness. Andy’s staff, which took a while to recruit and reorganize, is not only made up of hard working university graduates in municipal planning, they are very proud of the results – with reason. The city’s risks are now carefully measured by financial professionals who have recently raised Westfield’s bond rating to AA+. The best possible!

Have confidence, we will grow into a fine new city that has worked for over eight years to identify and keep its heritage. But we must also grow up. We will more than ever be known as that “beautiful city on the hill” with two new nationally recognized parks (Grand Park and Grand Junction Plaza), a series of neighborhood parks – all interlaced by many miles of magnificent trails plus perimeter development trails, (thank you Alyn Burnell and Melody Jones), and an unusually beautiful freeway (well it will be soon), all the direct result of really good leadership and a mostly thoughtful city council. The Monon Loop Trail will have its own freeway bridge. Every freeway bridge will have a safe pedestrian trail over or under. Thanks to our mayor’s direct involvement with INDOT and the design engineers the two sides of the freeway will be better connected than ever.

Mayor Cook made a commitment in his past campaigns to openly listen. A significant part of his success is his ability to create and listen to various citizen groups. Hundreds have regularly been involved in what I listed above for myself plus the Cultural Collaborative and the Downtown Westfield Association. The Westfield Chamber and its economic development committee play a great roll also, as does Hamilton County Tourism, Inc. The mayor, working with Hamilton County Judge Steve Nation invented the highly successful Youth Assistance Program that involves many Westfield volunteers as board members and mentors -it is now being copied by many other communities. How dare the interlopers charge that Westfield’s leadership “is not transparent,” (They made that up because they did not have any real issue to run on).

The ball fields are a city-owned business with rents paid by the several large well grounded leagues. I’ll say it again; in Grand Park’s first partial season visits are way over predictions. Believe it or not, almost a million visits. So now investors are knocking at our door and building our commercial AV. A 150-room exciting looking hotel signed on recently to add to the several new restaurants. A second near freeway hotel has been presented. A care center next door is already operating and a shopping area nearby is under construction.

Yea for Andy’s vision! We are so lucky! Can you imagine a more interesting clean industry to support ? Good luck Westfield. I beg you to stick with our successes!