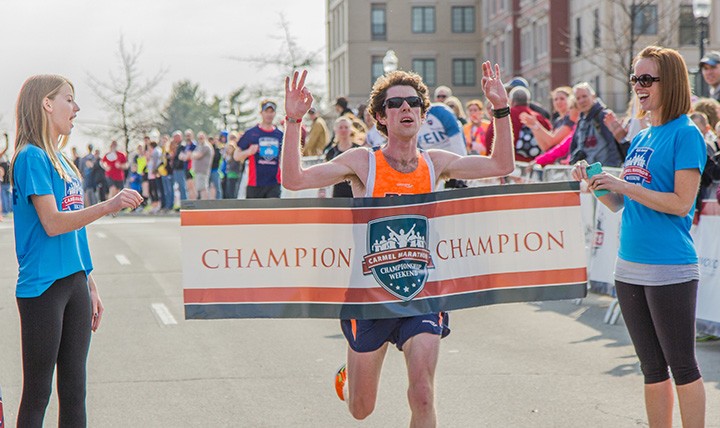 Jesse Davis has taken first place every year at the Carmel Marathon weekend. Can he do it again?

No headphones and no music. Nobody in sight. Just the sound of feet hitting the pavement.

Jesse Davis, a 33-year-old marathon champion, speaks mantras in his head as he runs past the 20-mile marker. It’s hitting him at this point, but he breaks the goal down. Don’t think of the entire 6.2 miles left. Think of it one mile at a time. If that’s too far, think even smaller, take it one segment at a time.

“You just have to push through,” he said. “Even if you tell yourself, ‘I have to make to that sign’ and then after that you say, ‘I have to make it to that car.’ Because everybody is going to be hurting by the end of that race. If you aren’t hurting, then you didn’t push yourself hard enough.”

After each mile, Davis looks at his GPS tracker and figures his pace. He thinks of it like a golf score. I’m plus one right now. I’m minus two right now.

For the Carmel Marathon, Davis hasn’t had to worry too much. In 2014, the next finisher was almost a half hour after Davis. He usually runs out front which is why he won the past three Carmel Marathon races. In 2011, the inaugural year of the race weekend, Davis entered the half marathon instead of the full, but he finished in first place then too.

“I’ve been fortunate that I’ve won pretty comfortably,” he said. “But I know I can’t win every time.”

His recent goal is to qualify for the Olympics, but he fell short by just seconds recently. There was some question about whether he’d have time to get ready, but he said he feels he has to defend his title.

“Every race my goal is to beat everyone that I am faster than, and to also beat some people that are faster than me because I raced smarter,” he said.

And when he talks about “racing smarter” it often deals with competitive runners who want to sprint out of the gate. He often has to make a decision if that runner will run out of gas or whether he needs to keep up.

“Sometimes I’ve been roped into going out faster than I wanted to and then it turns into a cat and mouse game of who’s going to let up first?” he said. “Those are hard races.”

He trains with a coach, Matt Ebersole, somewhere between 30 to 40 hours a week. Some days are training days and he runs 20 miles at a fast pace and other days are recovery days where he just runs 10 miles to keep his muscles moving. He said there’s nothing special for his training. It’s just committing to a schedule.

“It’s just a matter of putting in the work and the time,” he said. “I think anybody can do it if they are physically capable if they just put in the time.”

Todd Oliver, director and founder of the Carmel Marathon, said Davis is an impressive runner.

“When you talk about the elite guys like Jesse, they are just built different than you or I,” he said. “It’s really cool that our race has attracted so many runners, including elite runners like Jesse and also people who might be running their first marathon ever.”

Davis is hoping for a fifth victory, but even if he falls short he won’t be disappointed. He understands that as the race grows in popularity every year it’s only going to get tougher and tougher.

“It’s not always about winning,” he said. “It’s about running your best and sometimes other people can push you to run faster.” 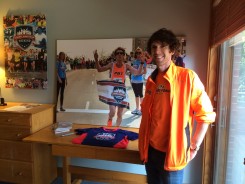