You are at:Home»Current in Carmel»Carmel Community»Bringing historic figures to life 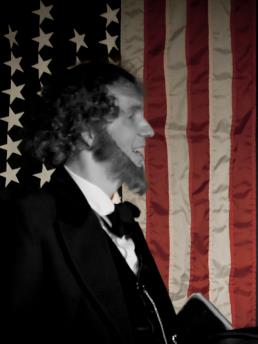 The Carmel Theater Company might not own a time machine, but its series of one man shows this spring might be the next best thing.

And it’s all at the intimate Studio 15 theatre located in the Carmel Arts & Design District across from Woody’s Library Restaurant. Shows begin on Sunday April 19 and will last until May 9 with each show featuring two 45-minute one-man shows from a historic icon.

Danny Russel, who plays Lincoln and Riley, said extensive historic research went into each portrayal. Personally, Russel has spent more than three years researching both roles, which he has played before at other events. He’s a lifetime member of the Association of Lincoln Presenters and he said it’s a passion that goes back to his childhood.

“My love of history goes back to my mother who was a school teacher,” he said.

Just like Daniel Day Lewis, Russel doesn’t use the deep booming voice for Lincoln but opts for the more historically accurate voice: slightly nasal with a Kentucky twang. Russel said he’s proud to portray both these great Hoosiers.

Russel has been a professional actor for 30 years and is a two-time grant recipient honored by the Indiana Arts Commission for his theatrical work.

Hank Fincken, who is playing inventor Thomas Edison, has spent years portraying historical figures such as Johnny Appleseed and Christopher Columbus.  The Indiana Arts Commission named him a “Master Artist” and the Indiana Theatre Association gave him the “Teaching and Service Award.”

Fincken said he enjoys all forms of actor, but there’s something special about portraying a historic figure.

“It’s a big difference,” he said. “When you are in the regular theater, your focus is on the audience and making them pleased any way you can. When I play a historical character, you hope they are entertained, but I feel there’s a duty to portray them as accurately as possible. And I believe that’s about showing the warts along with achievements. Sometimes the audience wants the mythology of the character, but I want to give you insights into the character and how that person really lived.”

MaryAnne Mathews, a writer actor and singer, portrays Mary Todd Lincoln. She’s a retired teacher and journalist and a volunteer historic interpreter at Conner Prairie. She recently performed in the show The Civil War at Westfield Playhouse.  She will be performing her original play “Mrs. President: A Visit with Mary Todd Lincoln” which covers Mrs. Lincoln’s life in the white house.

David Best, who is playing Thomas Jefferson and Marquis de Lafayette, has been active in historical reenactments and is a past president of the Propylaeum Historic Foundation, Inc., the Harvard Club of Indiana, and the Indianapolis Literary Club.