You are at:Home»Current in Carmel»Carmel Community»Carmel grad lands recording gig 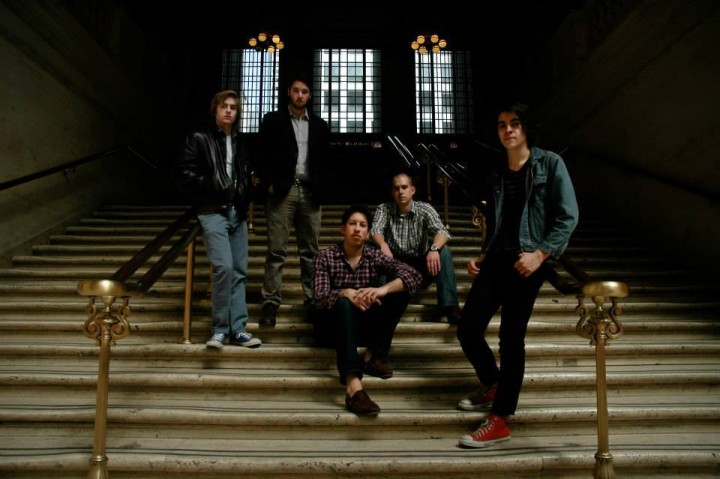 Alex Garrison and The band in Chicago. (Submitted photo)

In 2008, Alex Garrison graduated from Carmel High School where he had spent his entire life growing up. After high school Alex studied at Indiana University, and soon after moved to Chicago, where he has resided ever since.

While attending Indiana University, Alex met Steven Phillips, who later linked up with him in Chicago to start writing original material for a band they were forming. Soon after meeting in Chicago, they met platinum record producer Sean O’Keefe who had experience working with bands such as Fall Out Boy and The Plain White Tees. According to Garrison, “With him (O’Keefe) we recorded a four song EP that we used to recruit members to fill out the band.  Around March of 2014 we had finalized the band with myself, Steven Phillips (guitar), Manny Miller (guitar), Mike Bronk (Bass), and Jack McKee (drums).”

“We spent the large part of the month of December recording our first album as a band,” Garrison said. The band recorded the album in studios located in both Crystal Lake and Chicago. The Central Standard is working to have their first album released this summer, sometime during mid-June. At that time, physical copies of the album will be available via the band’s website. At the same time as the physical release, they also plan to release the album digitally on iTunes, Spotify, and Amazon.

While the band has held all of their shows in the Chicago and Milwaukee area, they are looking to expand to the Indy area soon as well. According to Alex, “Some of our upcoming performances are opening for White Mystery in a Red Bull Sound Select event at the Cubby Bear in Chicago on April 23.  We also will be playing are largest show to date when we headline the Double Door in Chicago on May 9.”