You are at:Home»Current in Carmel»Carmel Community»Fab Four to rock Palladium 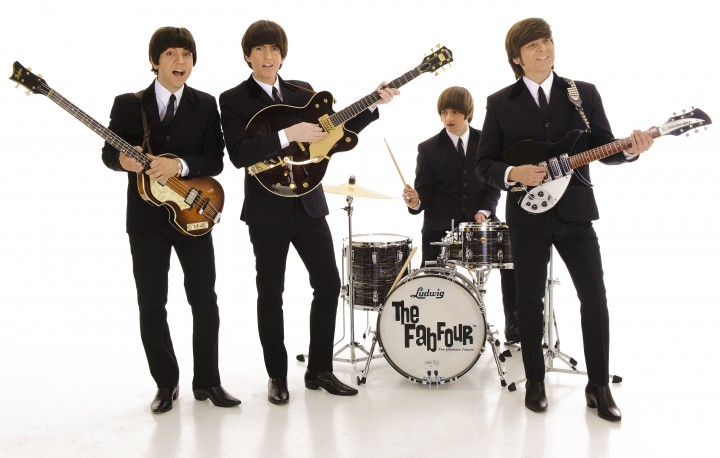 The Fab Four will perform in Carmel at 8 p.m., May 2. (Submitted photos)

Ron McNeill’s love affair with the Beatles began at an early age.

“I borrowed my older sister’s Beatles records and never gave them back,” he said.

While attending a Los Angeles Beatles Fest, McNeill watched a contest for sounding or looking like one of the Beatles. He took note of one singer impersonating Paul McCartney.

That was Ardy Sarrf, who won the contest.

“The next year I was so inspired I went up there by myself and won as John Lennon,” McNeill said. “I met up with Ardy a couple years later and we formed a group. It’s been our full-time job for 17 years. It’s the best job in the world. How many people wouldn’t want to be a Beatle?”

The Fab Four, featuring McNeill and Sarrf, will perform at 8 p.m. on May 2 at The Palladium at The Center for Performing Arts in Carmel.

McNeill said his manager has instructed him not to reveal his age.

“But none of us in the group are old enough to have an original Beatles memory,” he said. “Our drummer Erik’s (Fidel) first glimpse of the Beatles was on a VHS tape from the Ed Sullivan Show. It keeps carrying on through generations and generations.”

Fidel performs as Ringo Starr and Gavin Pring takes on the role of George Harrison. Pring actually comes from Liverpool, England, where the Beatles were formed. The group also has understudies at each spot.

McNeill said the group does about 100 dates per year.

“In the early days, we would play about every day,” McNeill said.

The Fab Four visited the Rock and Roll Hall of Fame in Cleveland the weekend of April 17-18. Starr was inducted as an individual performer on April 18 and was introduced by McCartney.

“We personally invited both of them to our concert on Friday and they didn’t come,” McNeill said. “But we were hoping if they came to our show, we’d get invited to their show. It didn’t work out that time.”

McNeill said The Fab Four played in front of Hall of Fame building for the morning TV news.

While there are tributes for many other groups, McNeill said everybody loves the Beatles, especially musicians.

“Those are some of the first songs you learn,” McNeill said. “Obviously the Beatles wrote the best songs in the world so it’s always great to imitate them. This is not a cheesy thing. We take it very seriously when we’re on stage. We want to get as close to those guys as we can. So that we can mirror their own memories in a way.”

The Fab Four are featured in “Come Together: A Beatles Tribute Documentary,” that was produced and directed by Steve Ison and John Scofield, who are based in Indianapolis. The 2014 documentary features 10 of the estimated 8,000 international Beatles tribute bands.

For more information on The Fab Four, visit thefabfour.com.