You are at:Home»Current in Zionsville»Whitestown firefighter to race in World Police & Fire Games 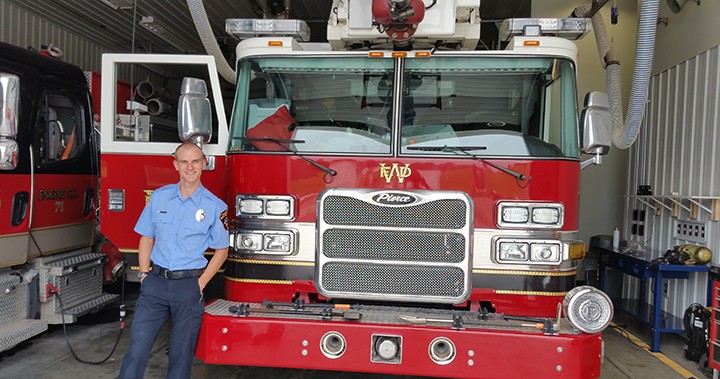 Sanders next to fire engine Ladder 71. (Submitted photos courtesy of the town of Whitestown)

After all, he figured it fit right in with his athletic background. Sanders competed in track and field and cross country at Baylor from 2004 through 2007, earning All-Big 12 once in 1,500 meters and in the Indoors Distance Medley Relay.

“I was looking at comparable times from the previous years they’ve done the Fire Games and was there on top so I thought I would give it a shot,” Sanders said.

Sanders is the first member from Whitestown Fire Department to compete in the tournament, which will be held in Fairfax, Va.

“Being the first from the department is neat,” said Sanders, who has been with department for 1 1/2 years.

Sanders, 30, moved to Indianapolis five years ago to compete for the Indiana Invaders, a track and field club. Sanders and his wife Laura live on the south side of Indianapolis but are looking to move to the Whitestown area.

“I haven’t raced a ton in the last year-and-a-half because I had a couple of injuries,” Sanders said. “I’ve raced three good races this season to get me ready for this and I’ve done pretty well. My goal is to get a medal. You can’t ever count on it, but I’m pretty confident that I’ve run well.”

Sanders, whose hometown is Katy, Texas, is following a workout schedule sent by a former coach in Texas.

“I’ve been doing it for a long time so I have a pretty good idea what to do but it’s always nice to have someone to communicate with to keep you on track,” said Sanders, who had a special runner’s shirt made to match the firetrucks at Station 71.

Along with injuries, Sanders said he didn’t race much in the last 1 1/2 years because of attending his paramedic training.

“But then I heard about the Fire Games so I talked to my fire chief about it and he offered to pay for registration costs and things like that,” Sanders said. “The games are pretty neat. It’s not just track. There are guys from all over the world that will come to compete, everything from cross fit to sharpshooting to basketball to football. There are like 20,000 competitors. It’s probably the biggest safety event in the world.”

The top three get medals in each event. The World Police and Fire Games are run every two years.

“The next one is in Montreal so that is doable but the following one is in China so I probably won’t do that,” Sanders said with a laugh. “I’m pretty pumped up about it.”

Sanders, who majored in exercise physiology, didn’t think about becoming a firefighter until after college.

“It kind of helped out with EMT and paramedic stuff,” he said.