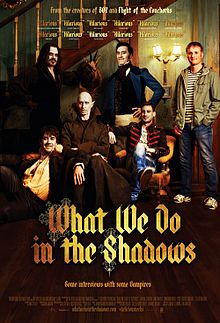 Mockumentaries have been around for 30 years or so, while the pop culture obsession with vampires for maybe the last 10. “What We Do in the Shadows” is the hilarious intersection of those two ideas, so obvious you wonder why anyone hadn’t done it before.

Jemaine Celement and Taika Waititi co-wrote, co-directed and star in the film as centuries-old blood-suckers struggling to fit in with the modern world. Vladislav (Clement) is an old-school Vlad the Impaler type, a former European despot who’s now living in a crummy Wellington apartment with several other nosferatu. Viago (Waititi) is a bit of a ponce who favors elaborate outfits and tries to be nice to people before killing them.

Deacon (Jonathan Brugh) is a party-hearty type, while Petyr (Ben Fransham) is thousands of years old, looks like a pale, desiccated corpse and barely speaks.

The faux documentary follows the group around as they have roomie spats – fangs bared! – go to parties, lure victims (often ineptly) and have a running feud with a pack of local werewolves.

It’s goofy and very droll, with the underlying gag that just because you’re immortal, live in darkness and feast on human blood doesn’t mean you can’t have a good time.