You are at:Home»Current in Geist»Geist’s first crime watch meeting 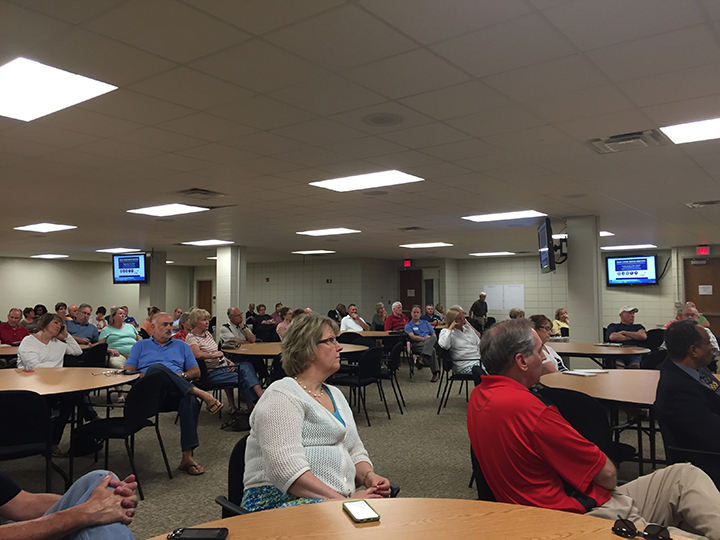 Residents from around the Geist area gathered at the Metropolitan School District of Lawrence Township building for the first Geist Crime Watch meeting. (Photos by James Feichtner) 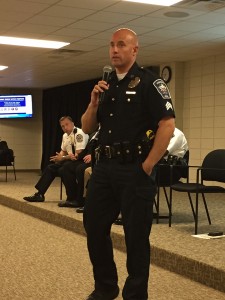 School isn’t quite back in session yet, but one room of the Metropolitan School District of Lawrence Township building was packed on the evening of July 21. Dozens of Geist residents gathered to participate in the community’s first ever Geist Crime Watch Meeting as law enforcement officials from Geist Patrol, Lawrence, Indianapolis Metropolitan and Fishers police departments spoke on issues regarding crime in the Geist area.

Officials spoke about their departments, analytics, recent crimes, problem areas and causes and prevention of crimes.

“The crimes that I saw were mostly property crimes, theft from vehicles and other types of larceny. A lot of your crime is driven by, in my opinion, the increased use in heroin. It affects all demographics. If [addicts]don’t have access to money then the only way to get that is by robbing and stealing from [residents].”

Other law enforcement officials also cited drug use as having a strong correlation to crime within the area. While it was not subjective to one region, criminals target areas such as surrounding neighborhoods as ways to pay for their narcotic addiction.

“We have people that are predators traveling around your neighborhoods, not just the Geist neighborhoods, not just around the lake, not just in Lawrence, not just in Fishers, but they are crossing all geographic boundaries looking for a fix and they are willing to come into your house in the middle of the night when you forget to shut your garage door or set your alarm,” Jim Cleek of the Indianapolis Metro Police Department said.

Another problem officials say has increased recently is criminals posing as solicitors.

“All of us have a lot of solicitors coming to our homes,” Cleek said. “We’ve found plenty of solicitors that are not legit. They’re using the cover of ‘I’m a carpet cleaner,’ or ‘I sell sweepers’ or an exterminator company. They talk to you and they scout out your house. We’ve had incidences this year where on multiple jurisdictions they’ve been marking houses.”

Officials recommended that if a solicitor does seem suspicious to contact local law enforcement, also noting that in any suspicious circumstance communication with police is key to keeping the community safe.

“We want to engage with you,” Fishers police officer Tom Weger said. “We want to educate you. We want to know what’s going on in your neighborhoods and we want to be able to let you know what we’re seeing and we need to have information back from you.”

“If we can just keep everyone calling; we count on you,” owner of Geist Patrol Brent McFerran said. “If it’s suspicious to you, it’s suspicious to us. So don’t hesitate. We’ve heard for years, ‘we don’t want to bother you.’ Well, bother us. That is what we are here for. We’ll come out to your residence and check it out.”

Another topic thoroughly covered at the meeting was how to avoid becoming targets for burglary.

“[Criminals] want the path of least resistance and so I would just ask that we all raise our situational awareness and realize that there are people out there that are just waiting to hit our house, our car or us if we make ourselves an easy target,” Cleek said. “Find ways to make yourselves a harder target. Shut garage doors. Turn on alarms. Lock doors.”

“Not everybody has the luxury of parking in the garage, but if you do, please park in the garage,” Weger said. “Double check your locks before you go to bed. Take the things that you want to keep in with you in the house and you should avoid becoming a victim.”

Residents were allowed to ask questions of the law enforcement officials at the end of the meeting. Questions pertained to the rise in heroin use, car break-ins, solicitation, patrol schedules of police and whether to call 911 or a specific district in an emergency.