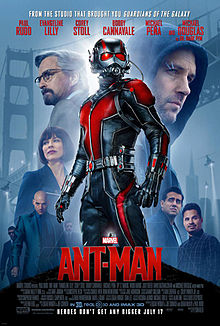 Its undeniable right now that Marvel is a cinematic juggernaut. With two or three movies coming out per year, each dominating at the box office, it’s hard to see an end in sight. However, as we reach the typically lesser known hero of Ant-Man and with the favored Edgar Wright leaving the director’s chair due to creative differences, most people began to wonder; Is Marvel starting to slip?

Ant-Man tells the story of Scott Lang (Paul Rudd), a cat burglar who has run into trouble a few too many times. He tries to go straight and get a job so he can see his daughter again, but when that fails he slips back into old habits. This time however, Hank Pym (Michael Douglas) and his daughter Hope (Evangaline Lilly) bust him out of jail to get his help stealing a militarized replica of the Ant-Man suit before it falls into the wrong hands.

While it does contain some exciting action, the film plays out more like a 60s/70s heist movie in many parts. What really sets it apart from other superhero films though is the intimacy of its story. While it does become about saving the world, for Scott its always about reconnecting with his daughter. The mentor and pupil relationship he shares with Hank, terrifically done by Michael Douglas by the way, feels genuine and creates more of an everyman hero in Scott. Think Die Hard more than Commando.

I think the ultimate disappointment in Ant-Man is that there a times where it felt like it could have been more. Much of the story and direction feels fresh and inspired, but always just slightly restrained from really being something different. Considering that it was #1 at the box office two weeks in a row however, it’s obviously more of a hit than a miss.