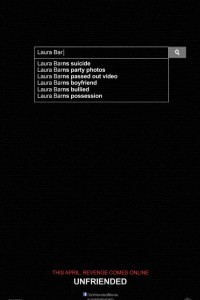 Horror films often play the plucky underdogs in the Hollywood game, scary movies that appeal to a small but ardent fan base. Most horror flicks these days are made pretty cheaply, like “Unfriended,” which cost a million bucks and sold $54 million worth of tickets.

I’m no accountant, but I believe that’s what you call a good return on investment.

It’s a clever and original flick, in that it takes place entirely via the computer and smartphone screens of a bunch of overpriviliged teens. They engage through social media, text message and Skype the way previous generations used cars or malls as platforms for gathering and interacting.

A bunch of smart, popular kids jump onto a private video chat and discover a stowaway: a “ghost” user by the name of billie227 – who claims to be their friend Laura, which is impossible because she killed herself a year earlier. It seems Laura/billie believes one or more of her pals were responsible for the humiliation that led to her suicide. She takes control of their computers and starts killing off the teens, one by one.

Director Levan Gabriadze and screenwriter Nelson Greaves have come up with an ambitious approach to the horror genre, in much the same way “The Blair Witch Project” did a cinematic generation ago.