You are at:Home»Current in Carmel»Jewelry CEO more than just an entrepreneur 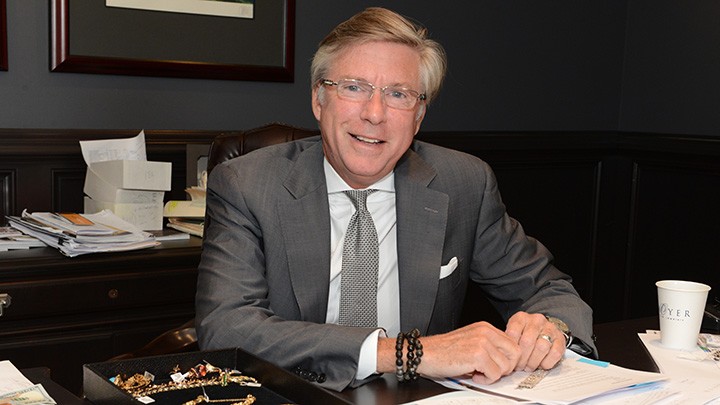 He’s the one who has been in the jewelry business for almost 40 years, with almost 36 of them spent in Carmel. His store, Moyer Fine Jewelers, sells some of the most well-known brands of jewelry and watches from around the world.

But who is Dan Moyer? How did he become so successful and well-known in the community?

It started with a family friend. Moyer learned about that friend’s wholesale Indiana jewelry business, and he asked Moyer if he wanted to sell some for him. Moyer agreed, and started selling them as a junior in high school.

From there, he continued his business throughout college, selling jewelry to sorority houses at Purdue for a year and then the next three at Indiana, and later on, with beauty salons. He distinctly remembers one sorority house at Purdue and how they bought their jewelry.

After getting his finance degree from Indiana in 1979, Moyer decided that he would make selling jewelry a full-time job. So he opened his first storefront in the same storefront as a beauty salon, with most of those salon beauticians and their customers becoming his own. In 1993, he opened his current space at 146th and Meridian.

One of the things that Moyer’s business has become known for are its promotion events, which are also fundraisers. For example, their “Men’s Night” event, held around the Thursday before or after Thanksgiving, has featured Maseratis’, Ducati motorcycles, “The Black Widow”, a professional pool player, police simulators, Colts’ cheerleaders, cigars, steaks, food, beer, poker games, a putting simulator and at almost every one of these, games of blackjack for prizes.

“These are mostly customers we’ve already had,” Moyer said. “It’s just sort of a way to get the holiday season going. Some guys shop early, some guys just come to men’s night and never come back, some guys like to shop December 24,” Moyer said.

Working for Mr. Moyer has been a pleasant experience for Moyer Jewelry’s graduate gemologist, Elizabeth Elliott, who joined last July.

“Positive and ever-changing,” Elliott said. “The opportunity I’ve been awarded at Moyer has been really impactful. He has opened doors in this business that I was excited to go through. It’s amazing the reach that he has. Being a private jeweler in Carmel, Indiana, one might think that it stops there. But it doesn’t at Moyer, and it doesn’t for Dan, certainly. He has connections throughout the country, worldwide. Amazing relationships. The biggest thing I’ve noticed is the respect the entire jewelry industry has for him. It’s remarkable.”

The ability to form relationships with clients is one thing that Elliott believes sets Moyer apart. An example was at last November’s “Men’s Night”. It honored a now-deceased client, also a personal friend of Elliott, who had cancer, and raised funds for his family to help with his expenses and treatment. She was happy that Moyer was willing to help someone who knew her and multiple Moyer employees. Over $7,000 was raised in admission or donations for that person and/or the American Cancer Society that night.

“I got the joy of seeing that given to my friend, who has since lost his battle with cancer. It’s pretty cool. Not a lot of businesses will do that,” Elliott said about Moyer’s efforts to help the client.

Moyer is also a man full of ideas, Elliott says, as he is always presenting a new idea every day.

“When we implement an idea, and it comes in a pyramid scheme from the top down, we’re all working on the idea, executing it, making things happen in the store. He’s already moved on to the next one. He’s very forward thinking,” Elliott said.

Outside of his business, Moyer enjoys hobbies such as traveling and golf. He has been to places like Switzerland and Italy, and was recently in England to visit London and Oxford. As for golf, he has been to and played at courses such as Pebble Beach in California and the legendary St. Andrew’s in Scotland. He is also an avid PGA Tour follower, and loves seeing young golfers win their first tournament.

“As a guy who’s played golf his whole life, I’m certainly not great, I’m better than average, but I’m not great. I’ve been a single digit my whole life. I know how hard it is and how hard you have to work to get there, and to see a guy accomplish his dreams is special. I’m a big golf fan,” Moyer said.

Looking at his time as an entrepreneur and business owner, Moyer is proud of his business and its performance, but isn’t “done” yet.

“I’m also not done by any means. I’m my biggest critic, I think, and I’m 58 and I feel like I’m 28 because I think there’s just so many more things I think we should be doing and how much better I think we can be than what we are,” Moyer said.

Favorite movie: Mr. Holland’s Opus (but many others, too)

Most DVR’d show: Doesn’t do it, but thinks he should