You are at:Home»Current in Carmel»Carmel Community»Franciosi finds her fit with training business 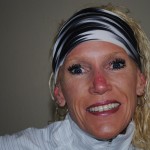 Trish Franciosi’s father cautioned being a fitness leader wasn’t going to pay the bills so she got her business degree from Ball State.

“So I went into accounting and hated every minute of it,” she said. “But I still kept personal training people on the side.”

Soon the Noblesville High School graduate could take the numbers game no longer and took a job as the Lifetime Fitness director in the Castleton area. After five years, she started her own business, Franciosi Fitness Performance, starting with children’s fitness programs first. The business has kept growing over the past 15 years. Franciosi, who lives in Carmel, has 17 trainers work for her at mobile sites around Indiana and Illinois.

“The morning programs we are in the daycare centers,” Franciosi said. “At the noon hour, we do corporate wellness and nutrition programs at businesses. Then we work with after-school programs at the elementary and junior high programs. In the evenings and early morning, we do our adult programs.”

Franciosi, 44, teaches herself despite dealing with two autoimmune diseases, lupus, which can attack any part of the body, and scleroderma, hardening of the skin.

“It just shut down a valve in my heart and half of one of my lungs has hardened,” Franciosi said. “I just do as much as I can. I’m a runner and it makes it very hard to breathe. It’s terminal. It (lupus) only gets worse and there is no cure. I’ve had it for 15 years. Back when I was first diagnosed, the life expectancy was only 20. My doctor said if I was not working out and staying as physically active as I am, I would be way worse than I am now. It’s very debilitating. Having the one (disease) is bad enough, but having both is a double whammy.”

Some are surprised, telling Franciosi she looks healthy.

“But it reality, one week out of the month I’m not,” said Franciosi, who takes strong medications and occasionally needs IV treatments.

Yet Franciosi is not one for self-pity.

“You can sit home and cry over it or you can try to move on and deal with it,” said Franciosi, who tries to educate others on her diseases.

Franciosi does research and makes sure to ask her doctors plenty of questions. Franciosi, who has three daughters, Ashley, 20, Haley, 15, and Lily, 9 with her husband Jeff, said she wants to be around for her family.

Her clients need her, too. Ali Gibson has been training with Franciosi for eight years and has lost 90 pounds in that time.

When first suggested she call Franciosi, Gibson said her first thought was “oh great, another skinny little trainer that is going to make me eat lettuce and run five miles a day. No thanks.”

So she took awhile to call until a shopping for swim suit motivated her it was time.

“She was the kindest, most welcoming person ever and I fell in love with her from the minute I met her,” Gibson said. “She makes you feel comfortable from day one. She never made me feel overweight or out of place ever. Needless to say I started training with her and have never left. Doing a ‘Trish workout’ is as much a part of my weekly routine as brushing my teeth.”