You are at:Home»Night & Day»Murder and hilarity ensue at the Belfry in “The Butler Did It” 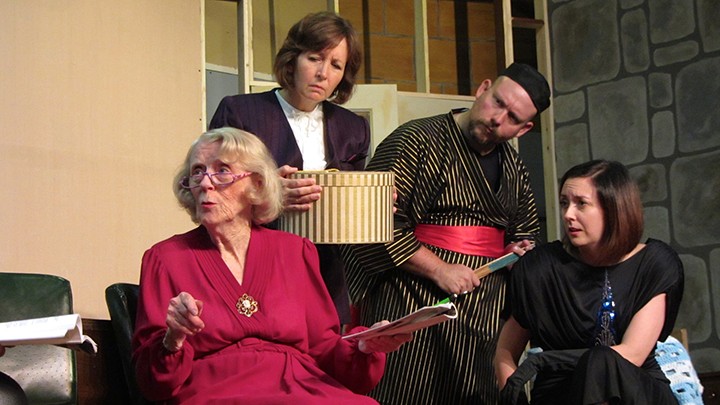 It’s your typical dark and stormy night. On a remote island off San Francisco Bay, wealthy socialite Miss Maple invites a group of detective writers to a lavish party at Ravenswood Manor, insisting that each come portraying their famed detective characters for the fun-filled weekend.

All goes well until suddenly a guest turns up dead and the detective writers try to act like, well, actual detectives.

Tim Kelly’s “The Butler Did It” promises a “mixture of edge-of-the-seat [tension]and gut-wrenching laughs,” according to director Jeff Bick. The play runs eight times at the Belfry Theatre Sept. 18 – Oct. 4.

“It’s one of those great plays where you have the big reveal at the end, but there are so many other things that surprise you throughout,” said Kelly BeDell, who plays the maid. “It just wets your appetite. … It keeps you on your toes.”

Bick said every character in the show is a caricature or tribute to a famous mystery character in mainstream media. Any murder mystery fan might recognize different personalities and plot points.

Among the fictional detectives are a Sherlock Holmes-type; a priest based off Father Dowling; a “famous oriental detective;” Rick and Laura Carlyle, based of Nick and Nora Charles; a hard-bitten gumshoe; and a female James Bond.

The audience soon finds out, however, that the writers pale in comparison to the wits of their famed creations.

“Their creations are much better detectives than they are, and that is an understatement,” Bick said. “They’re nowhere near as smart as they think they are. … That’s where the comedy is.”

Though often played as a farce, the Belfry’s version of “The Butler Did It” will have a more realistic tone, intertwined with comedic elements. It’s a challenge, Bick said, to not let the actors cross over into farce.

The challenge for the actors is playing characters with so many layers, actor Brenna Campbell said.

“Everybody has a secret, and that’s something you find out within the first, maybe, 10 minutes of the play,” Campbell said. “[As an actor] you have to walk the balance with what you know as a character with what you don’t want to give away.”

“The Butler Did It” is a family-friendly show, Bick said.

The Belfry is offering a special ticket on Saturdays that includes a three-course dinner and the show. Guests start their night at Matteo’s Ristorante Italiano in Noblesville and end it at the Belfry. Details are on the Belfry’s website.

Bick hopes this show will help audiences see the quality of community theatre.

“I’ve got a really, really good cast of actors and actresses, and they’re bringing a lot to the characters,” Bick said. “My goal is to let people see what kind of theatre we can do here.”

What: The Butler Did It

Cost: $15 for adults and $12 for children 12 and younger; special dinner/show combo tickets for $50 per person, including three-course meal at Matteo’s.