You are at:Home»Current in Carmel»Carmel Community»Teacher shares passion for running, writing 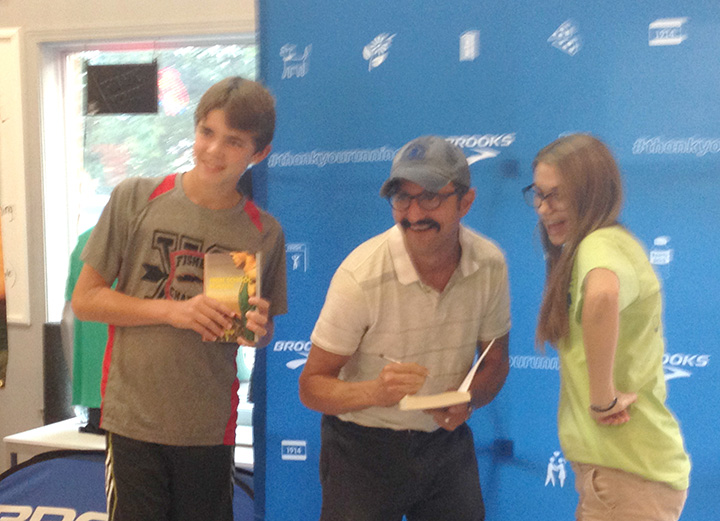 With his first novel, Bill Kenley blends his two passions of writing and running.

Kenley explained the process of writing “High School Runner (Freshman)” at the Runners Forum in Carmel on Sept. 2. It’s the first of a series of four books, with the sophomore season planned for release by August.

“The first one came together pretty easy,” Kenley said. “I’ve written 200 pages but it’s rough. You tend to use the easy stories first. Now I’m having to work harder at it. I want it be just as good. I’m proud of the first book and I want the second, third and fourth to be just as good.”

Kenley, 44, ran cross country as a student at Noblesville High School, where he has been a teacher for 19 years. Kenley, who teaches creative writing and English, is a volunteer assistant coach for the NHS cross country team. He previously was an assistant cross country coach for around 10 years but gave it up this school year to concentrate on his books.

“I love the sport, the friendships I made and the way it affected me,” said Kenley, who has ran in the Boston Marathon three times and has completed a 50-mile race. “It was a good thing to do in high school. The book is a love letter to the sport.”

Kenley’s fictional character, Sherman Kindle, has an identical twin brother on the team like Kenley did and the story is set in the 1980s. But the similarities pretty much end there.

“I always knew I wanted to give it a good shot to try to write a novel,” Kenley said. “They say write what you know, and I finally took that advice and it worked out for me.”

Kenley said the book has been well-received at the cross country summer camps he attended.

“It was a really good book, I love it,” said St. Simon School eighth grader Katie Darragh, who attended the Runners Forum event. “It was super funny and inspirational.”