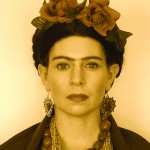 Those who missed the iconic musical in the summer months have a chance to see Gregory Hancock’s 20 year project, “La Casa Azul”, once again.

An encore set of performances about Mexican painter Frida Kahlo will take place Oct. 1-3 at The Booth Tarkington at 7 p.m.

“It was really well received the first time and we had great audiences and a great response to it,” said Gregory Hancock, writer and choreographer of “La Casa Azul.” “It was in the summer, so a lot of people who wanted to see it weren’t around since they were on vacation and such.”

Hancock received lots of encouragement from the public to run the performance again.

“It’s a chance to refine it. When you a put a show up the first time it is a huge undertaking to get the show done and you don’t always have everything you want so it’s a great opportunity to refine things,” Hancock said. “The whole production staff had things they want to do and refine.”

Another unique occurrence will be going on during the same time as the play. Sept. 15 to Oct. 15 is National Hispanic Heritage Month, which Hancock hopes will draw university and school students in to the show.

After these last performances, Hancock said “La Casa Azul” won’t be back in Carmel or even Indiana for a long time, if ever. Hancock is searching for different theatres around the world, including places like Mexico, Australia and Europe, to produce his musical.

The soundtrack from the musical is available on iTunes. WFYI, Indianapolis’ public broadcasting station, will be at the musical filming it to show over television at a later date.

Tickets cost $50 for adults, $33.50 for students and seniors. They can be purchased at 843-3800 or www.centerfortheperformingarts.org.