You are at:Home»Current in Zionsville»Supreme Court hears Whitestown, Zionsville arguments 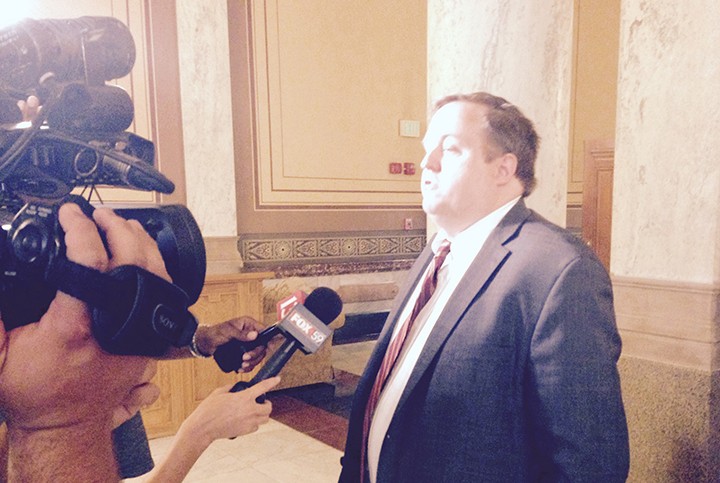 Mark Cranley, an attorney representing the Town of Zionsville, spoke to the media after presenting his argument to the Indiana Supreme Court. (Photo by Sam Elliott)

Attorneys for the towns of Zionsville and Whitestown on Sept. 23 presented arguments to the Indiana Supreme Court — the latest chapter in an ongoing land battle between the two towns over Perry Township.

Whitestown, which filed the appeal to the state’s Supreme Court as it seeks to protect its western border for future expansion, claims Zionsville and Perry Township cannot merge because they are not adjacent to one another.

“They are entirely separated by Whitestown,” Whitestown attorney Steven Unger said in his argument. “You can’t go from Zionsville to Perry Township without going through Whitestown.”

Zionsville believes it does neighbor Perry Township as a result of reorganization with the Eagle Township in 2010.

After Whitestown filed a lawsuit to block the merger, voters in both Zionsville and Perry Township approved the reorganization in the November 2014 election — with more than 90 percent of Perry Township voters on board, Zionsville’s lawyer said Wednesday.

“Before there was an election, it was very publicly proclaimed that Zionsville and Perry Township can’t reorganize,” Unger, Whitestown’s attorney, said. “It remained on the ballot because it was already too late to take it off.”

A Boone County judge ruled in Whitestown’s favor in October, but a three-judge panel in the Court of Appeals heard the case in March and returned a decision in Zionsville’s favor June 2. Later that day, Jeff Papa was sworn in as Zionsville’s first mayor.

“Ultimately I think the law is supporting our side. It’s up to the court to decide at this point,” Zionsville attorney Mark Cranley said. “The statute doesn’t say anything about being landlocked. That’s an argument Whitestown’s come up with, but it doesn’t really apply in the statute.”

The Indiana Supreme Court will now decide whether or not it will make a ruling in the case, but its timetable is unknown.