You are at:Home»Current in Carmel»Carmel Community»Finney passionate about Civil War history 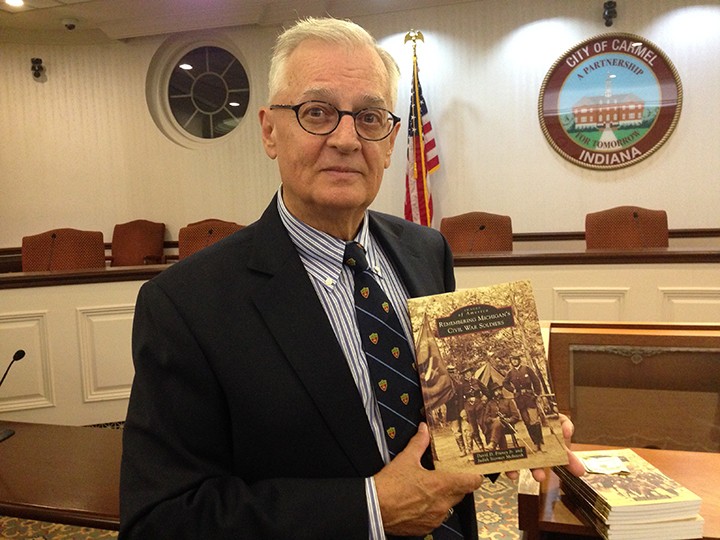 It’s a passion that David Finney has embraced for more than 60 years.

“I’ve been interested in the Civil War since I was 11 years old,” Finney said. “That’s when I got my first book.”

A Beech Grove High School and Indiana University graduate, Finney moved to Carmel 18 months ago and lives near his sister.

Finney, who worked for five summers as a visiting historian for the National Parks Service, spoke at the Hamilton County Civil War Roundtable at Carmel City Hall on Sept. 9. Finney has been involved in Michigan Civil War roundtables since 1969. He said he is interested in learning more about Indiana’s involvement in the Civil War.

Finney recently wrote a book “Remembering Michigan’s Civil War Soldiers” with Judith Stermer McIntosh. It came out in March and it is in its third printing.

“I’m working on a biography about a Michigan soldier (Norman Hall) who was at Fort Sumter (S.C.) (during the Civil War),” Finney said. “He was the only Michigan solder who was at John Brown’s execution.”

Brown, an abolitionist, was hung in 1859 after leading a raid on Harpers Ferry, Va.

During his Hamilton County talk, Finney discussed the Civil War career of George Armstrong Custer, who grew up in Michigan and Ohio. Custer became one of the youngest generals in the Union Army at age 23.

“I’ve got to meet the Custer family over the years and they’re always been wonderful,” Finney said.

Finney gave the opening speech when the Emancipation Proclamation visited the Henry Ford Museum in Dearborn, Mich., during the Civil War Sesquicentennial in 2011.

“For me being selected for that was a high honor,” Finney said.

He has participated in documentaries for the History Channel and one documentary, narrated by James Earl Jones, for Antietam National Battefield (in Sharpsburg, Md.).