You are at:Home»Current in Fishers»Fishers boy chosen as Riley Champion 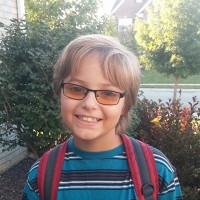 Every year during the holiday season, Riley Children’s Hospital kicks off a campaign to bring awareness to the patients in order to spur donations. Each year eight children are chosen per state to be a Riley Champion during the Gift of Hope Happens Here campaign.

This year Fishers resident, Ethan McKinney, was chosen. Ethan was treated at Riley for a rare heart condition, and continues to visit the facility for checkups. Ethan was initially diagnosed with a heart murmur. Doctors hoped it would go away on it’s own, but when it didn’t they did an ultrasound. Ethan was diagnosed with patent ductus arteriosus.

Meaning Ethan’s blood was being pumped back into his body without being oxygenated by his lungs. Ethan would get winded easily playing soccer and his lips would turn blue during routine swimming lessons. RCH doctors determined Ethan needed surgery.

“They did a catheterization through a vein in his groin. They put a spring inside the vessel to plug it up. Now all of his blood is forced to go into lungs before entering the other chamber of his heart,” Julie said.

Ethan is now thriving, and feels lucky to have received help from RCH.

“He knows that it makes him one of the very few special kids that have gone through something like this at such an early age. He feels very happy that he’s able to go to Riley, and it’s so close to where we live,” Julie said.

Ethan is hoping to set a world record during fundraising for RCH. To get involved or to donate, visit rileykids.org.