You are at:Home»Current in Zionsville»New councilors bring wealth of business experience 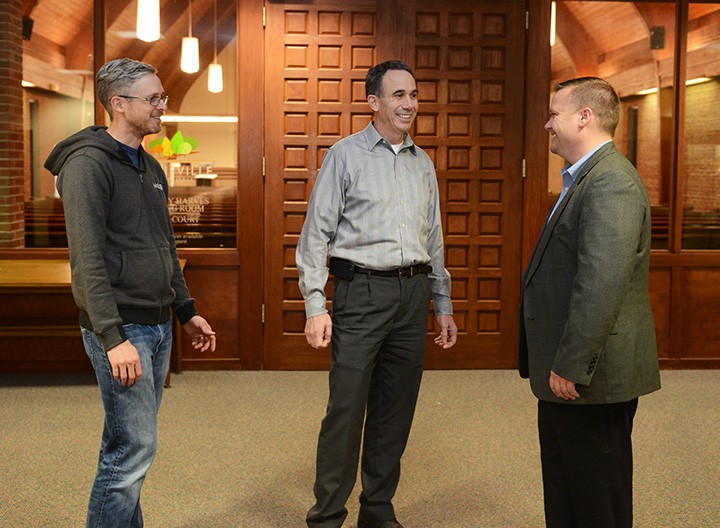 Three brand new faces joining the Zionsville Town Council in 2016 will bring a wealth of business experience to their new roles.

Representing District 1, Centier Bank mortgage sales manager and loan originator Bryan Traylor is a former president and current board member of the Zionsville Chamber of Commerce. Dr. Kevin Spees, from District 2, has run his private dentistry practice in Zionsville for more than 25 years. New District 5 representative Josh Garrett is the chief strategy officer and a co-founder of MOBI, the town’s largest private employer.

All three believe their business acumen will help them help Zionsville as the town continues to push for an 80/20 percent split between its residential and commercial tax revenues.

“That’s something I support and trust we’ll get to. That will alleviate a lot of problems that both the town and school have,” Spees said.

Spees said he’d been thinking about running for town council for a long time, and when mayor-elect Tim Haak wasn’t going to be running in District 2 again, he thought now was the right time.

“I was born and raised here in Zionsville and I think some councils in the past could have done a better job with some things. I think the current council has done a pretty good job getting things together since the tax caps on the property values. That’s really hurt both the town and the schools,” he said. “Zionsville for a long time was not business-friendly and that goes back to hen I was a kid even.”

Garrett’s mobile device management company, MOBI, has grown along with Zionsville since its launch in 2009.

“When we started here, we were eight employees and now we just passed the 300-employee mark,” Garrett said. “Part of that growth was support from Zionsville and support from Boone County, and so if I’m able to tell that story and bring some of that commercial activity we need here, especially from a tax base perspective, that’s sort of what I was hoping to accomplish and what I thought I could at least bring to the office.”

A highlight of Traylor’s time with the chamber of commerce included taking the staff from part-time to full-time while he was president.

“We grew the membership to an all-time high level and really made the chamber a force in economic development for the area,” he said. “Having a part in some of that, there were residents that asked me if I would be interested for running for town council. I said, ‘You know what, that has actually come to mind before.’ So I threw my hat in the ring.”

Traylor, who lives in Union Township, said protecting the rural lifestyle common in his district is one of his goals for his time on town council.

“I think that’s a great thing about Zionsville — there’s a little bit of everything for everybody. We have some fantastic neighborhoods, but if you want to live a more rural lifestyle you can do that in Zionsville as well. We want to protect everybody’s interest in District 1 and help represent the town and economic development side as well.”