You are at:Home»Current in Carmel»Carmel Community»Carmel High School debate team advances to Round of 32 in International Public Policy Forum competition 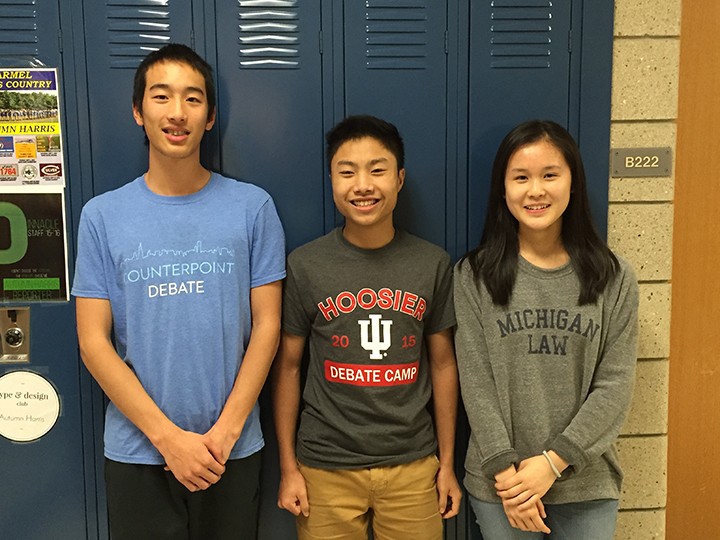 From left, Michael Wang, Darren Chang and Katie Long are the first team from Carmel High School to advance to the Round of 64 in the IPPF competition. (Submitted photo)

A team of three students at Carmel High School has advanced to the Round of 32 in the International Public Policy Forum high school debate competition. Michael Wang, Darren Chang and Katie Long comprise the first team ever from CHS to enter the IPPF competition.

CHS defeated York House School from Vancouver, Canada, to become the only team from Indiana still in the competition. They are now competing against Plano Senior High School from Plano, Texas. The winner is expected to be announced Jan. 26.

By advancing to the Round of 32, CHS remains eligible for an all-expense-paid trip to New York City, where the top eight teams will compete in the IPPF finals Apr. 2 for a grand prize of $10,000.

All teams in all rounds debate this year’s IPPF topic, “Resolved: Genetically modified organisms are essential to global food security.” The CHS team debated the negative in its qualifying round and the affirmative in the Round of 64 against Canada’s York House School of Vancouver.

“The overall purpose of these competitions is education. So the idea of forcing people to flip sides is it prevents you from locking yourself into one opinion. It’s not a one-sided issue, so they want you to look at both sides and understand that there might not be a correct answer,” said Wang, a junior.

“It’s interesting to see what people from other countries think. They focus on different issues than we do, and they look at the issues slightly differently,” he added.

The team’s coach is Harvard University senior Rebecca Chen, although traveling for the Elite 8 round would require the team appoint a coach affiliated with CHS. Wang said the team has considered two CHS educators and plans to approach them if they advance to the top 16.

“When we went into this competition, we were just doing it to try it out,” Wang said. “It would be really amazing if we can make it to NYC. We’re just working our way up right now.”