You are at:Home»Current in Zionsville»Whitestown, INDOT working to reconfigure I-65 Whitestown Parkway exit 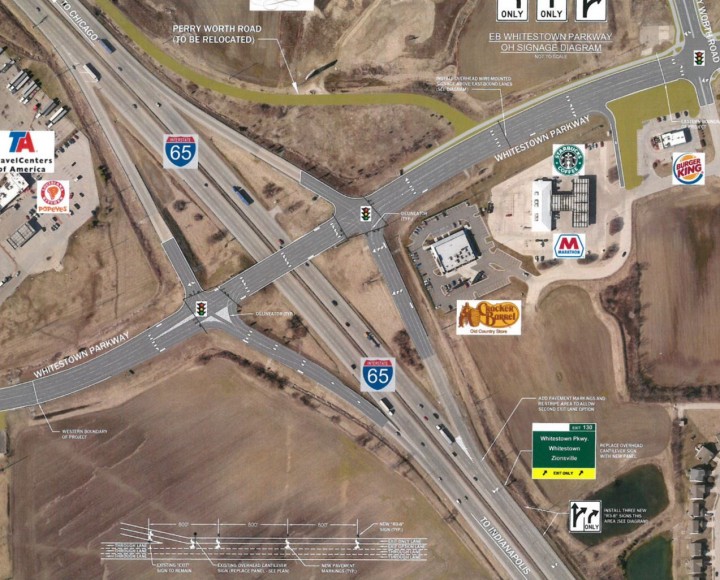 Whitestown and INDOT are working together to reconfigure the interchange at I-65 and Whitestown Parkway. (submitted rendering)

Zionsville and Whitestown commuters using exit 130 at Interstate 65 and Whitestown Parkway are expected to get some traffic relief. The Town of Whitestown is working with INDOT to reconfigure the interchange this summer.

Whitestown Town Manager Dax Norton said that the interchange has been a problem for several years since I-65’s latest lane expansion.

“It goes back to when the interstate was actually widened to six lanes in 2011,” Norton said. “Everyone had desired that that interchange would be completely replaced during that project and it was never really a part of the project.”

The topic died down but was revisited when both Whitestown and Zionsville’s town councils passed resolutions urging INDOT to consider a solution in 2014.

“We knew they weren’t going to completely replace the interchange, so our engineers and our town council approved the spending of money to engineer a short term plan,” Norton said.

The result is a short-term fix that will cost approximately $1.2 million. INDOT will provide 75 percent of the funds with Whitestown funding the remaining 25 percent. Whitestown-based Calumet received the bid for the project.

Norton said the main cause of traffic is the growth the two towns have experienced.

“Our engineers have told us that the majority of the intersection’s traffic issue certainly is, number one, growth from both Whitestown and Zionsville,” Norton said.

The lack of exits out of the two towns also leads commuters to travel the exit 130 interchange.

“If you think about your egress out of Zionsville to go south you’ve really only got two choices: Ford Road and 96th Street (to Interstate) 465 or you come west to the exit 130 interchange so that puts a lot of strain on the interchange. A lot of the Zionsville commuters use that to go West and South,” Norton said.

Norton expects construction to begin in April and be complete by June. Construction will take place during later hours of the day outside of high traffic times.