You are at:Home»Current in Carmel»Carmel Community»Ballard, Brainard speak on U.S. oil dependency 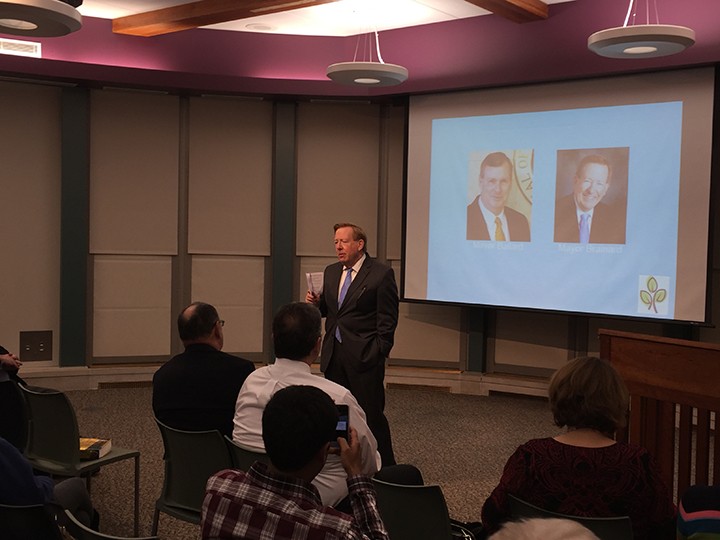 Residents attending the Feb. 17 Carmel Green Initiative Sustainable Living Seminar heard from two local leaders about the U.S. dependence on oil, its impact and what can be done about it.

Hosted by CGI and the Carmel Clay Public Library, the event featured a screening of Roger Sorkin’s “The Burden” as well as presentations from Carmel Mayor Jim Brainard and veteran and former Indianapolis Mayor Greg Ballard.

Following the screening, Ballard spoke to residents and emphasized that the U.S. involvement in Middle Eastern affairs related directly to its dependence on oil.

“My basic question is why are we in the Middle East?,” Ballard said. “That’s a good basic question to ask. Forty years we’ve been doing this since the Middle Eastern countries figured out, because of the oil embargos of 1973, they could affect our quality of life. That’s why we are there.”

Brainard discussed Carmel’s eco-friendly endeavors, including its hazardous waste recycling facility, more than 170 miles of bike trails, the efficiency of roundabouts and the implementation of hybrid vehicles for city staff.

“When hybrids were brand-new I thought, why can’t the city set an example and get them out on our roads as city vehicles?” Brainard said. “Now we have a fleet of hybrid vehicles for the city we’ve been using now for 11 years.”

Brainard closed by explaining the important impact that U.S. cities can have on changing fossil fuel dependence within the nation.

“85 percent of our country’s population lives in cities. Cities and people in cities can make a real difference,” Brainard said. “We’re doing it in Carmel, Indiana, we’re going to keep doing it and also set an example for a lot of other cities in the country if we do it right here.”