You are at:Home»Current in Carmel»Carmel Community»Mayor: Obstructed view at roundabout intentional 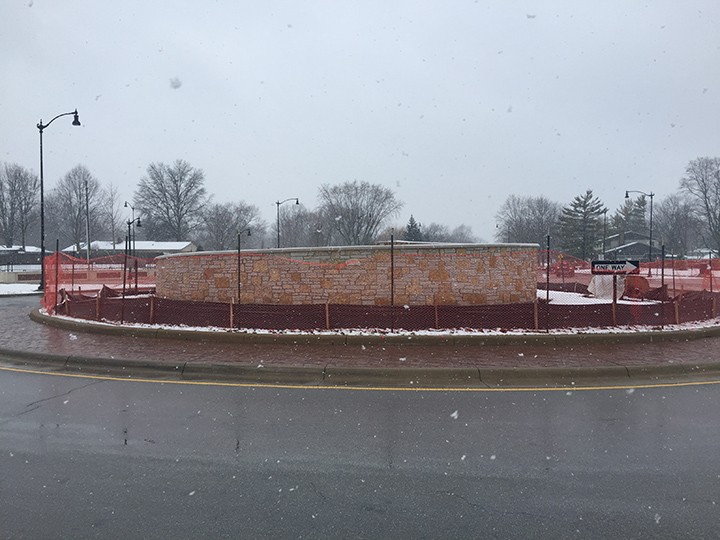 Landscaping improvements are underway in the roundabout at Keystone Avenue and Main Street. (Photo by Adam Aasen)

Carmel is giving a facelift to the roundabout interchange at Main Street and Keystone Parkway with new lighting, landscaping and a decorative stone wall.

“Just as our district archways provide the gateways into this unique area, it is fitting to improve this nearby interchange so that visitors know they are about to experience something very special,” Carmel Mayor Jim Brainard said in a statement.

The decorative walls ascend in the shape of a Fibonacci curve with a decorative urn sitting atop a pillar. The shape has been described as “serpentine,” and Brainard said it will look beautiful when it’s complete.

But not everyone is a fan of the new landscaping design.

One reader sent a letter to Current in Carmel saying they thought the project looked like “giant, concrete cinnamon rolls… that are obstructing everyone’s view of traffic.”

“It used to be grass,” Lynette Quinn wrote. “Now it is a concrete swirl on each end. Since I pass it every day about 6:45 a.m. – before breakfast – they look an awful lot like giant concrete cinnamon rolls. They block visibility, just like some of the other art and structures in Carmel.”

“Actually, they’re there for people who don’t know how to drive through a roundabout,” he said in an interview with Current in Carmel. “You want to block visibility straight across the roundabout to encourage people to look to the left for the gap. One of problems we have with roundabouts when it comes to moving the amount of traffic they are supposed to move is that people see people way on the other side and then they wait for them. They are just supposed to look to the left for the gap and go. So blocking the intersection prevents that. It helps roundabouts function better.”

The Main Street and Keystone Parkway roundabout interchange project will cost $539,894 and is funded by the 2010 county option income tax bond.