You are at:Home»Current in Carmel»Carmel Community»Family of 6, dog, safely escape house fire 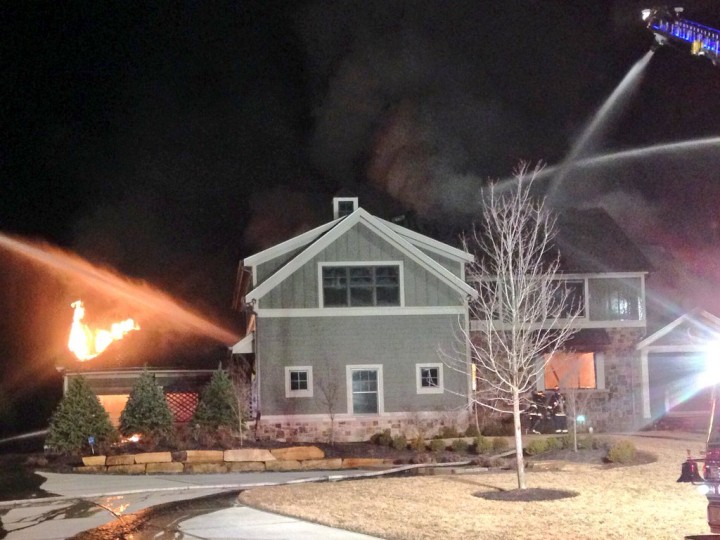 More than 50 firefighters helped put out a blaze in the 10000 block of Coppergate Drive. (submitted photo)

At least eight fire engines were dispatched to a fully-involved fire at a large home around 3:30 a.m. March 9 in the 10000 block of Coppergate Drive off of 106th Street in Carmel.

More than 50 firefighters were at the scene, which is just south of Crooked Stick Golf Course. Six people —two parents and four children — evacuated the house safely before fire crews arrived after they heard a smoke detector. Their dog also got out safely.

Carmel Fire Dept. firefighter Tim Griffin was on duty with Station 42 when he responded to the call.

“We were a block away and we could see visible flames,” he said. “So it was already involved.”

The homeowners said they were awakened by a smoke detector, which Griffin said sends an important lesson to everyone about fire safety preparedness.

“Right now is the time of year when everyone is going to change their clocks for Daylight Saving Time, so when you change your clocks, it’s a great time to check your smoke detectors,” he said. “In a case like this, it was 3:30 in the morning. People are usually sound asleep, so a smoke detector can save lives.”

Water was on the fire in just a few minutes, keeping it contained. Because of the large size of the home, Griffin said it took a little bit of time to get the fire completely under control. There were no complications, but stations from as far away as Pike traveled to assist in suppression.

“In Carmel, we do have some sizable houses that can create some complications, but we didn’t have any complications with this one,” Griffin said.

The case is under investigation and no cause has been identified or reported yet.