You are at:Home»Current in Zionsville»Study shows nearly half of town’s streets rank poor or worse 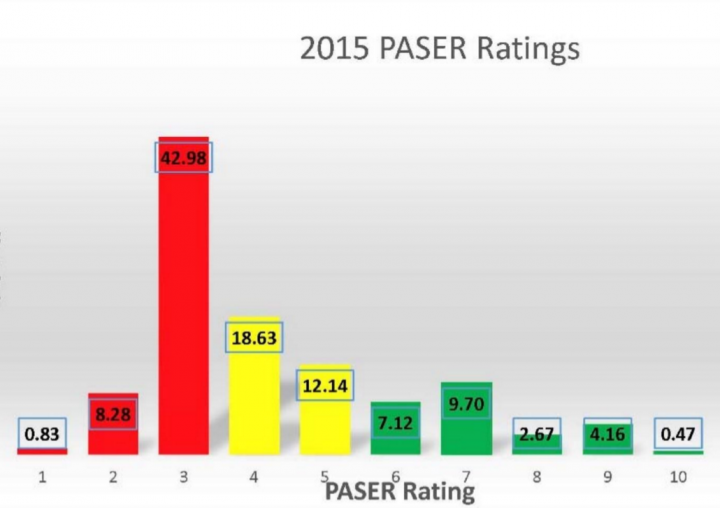 A study by USI Consultants ranked 107 miles of Zionsville roads by condition, with 1 being failed, 2 being very poor, 3 being poor, 4-5 being fair, 6-7 being good, 8 being very good and 9-10 being excellent. (Source: USI Consultants)

Greg Wendling of USI Consultants presented the findings to the Town Council at its March 7 meeting. He said a two-man crew drove all 107 miles of Zionsville roads to visually inspect and rate them from 1 to 10, with 1 being a failed road and 10 being excellent condition.

Nearly 40 percent of Zionsville roads ranked at a 3, or poor condition, with another 8.5 percent ranking worse.

USI recommends structural improvements for roads that rank at a 4 and below. In Zionsville, more than 147 lane miles of road meet that criterion, which USI estimates would cost $22.9 million to repair if done at once. A lane mile equals one 11-foot lane times one mile.

“My sense is that we are spending at a very good level for a community of our size,” Lantz said.

Wendling said the results are similar to what his company recently found in Lebanon and Boone Co. The roads in Whitestown fared better, he said, in part because most of them are newer.