You are at:Home»Current in Westfield»Back in the day: Resurrecting Old Friends Cemetery Park 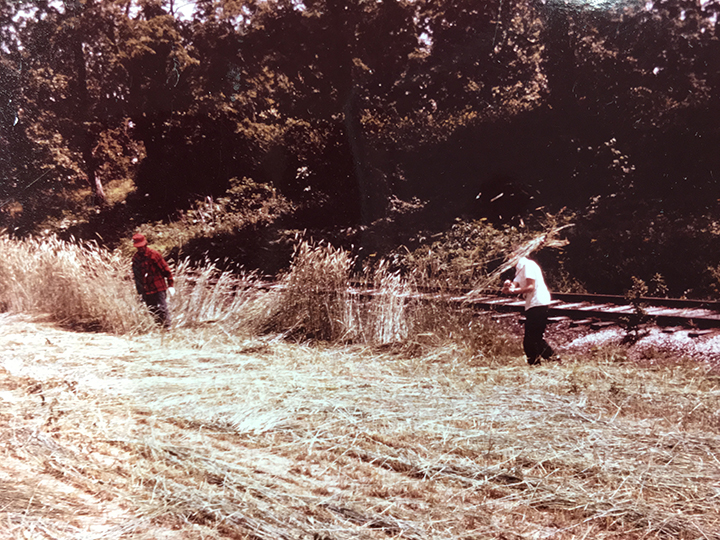 Volunteers clear brush from the cemetery at the site of the old Midland Railroad. (Submitted photo)

Old Friends Cemetery Park is the site of Westfield’s first cemetery. The land for the cemetery was donated in 1834 to the Friends Church by Simon Moon, one of Westfield’s founders who died within the year and would be buried in the very ground he had gifted to the community.

In the mid-1880s, the Midland Railroad cut through land immediately south of the burial sites, and the last burial to occur in this quaint Quaker cemetery was in 1898.

For more than a half century, Westfield’s original cemetery fell into disrepair and neglect. Headstones were overtaken by weeds, tall grasses and trees.

In the 1960s, the Westfield Woman’s Club entered into an agreement with Westfield’s town board to convert this “abandoned, unsightly small cemetery … into a place of beauty.” This work included clearing away brush, moving headstones to the eastern portion of the property, installing a trail and new sidewalk and erecting a monument listing the names of those believed to be buried in the cemetery.

The new park was dedicated Nov. 5, 1967 as the Doan Memorial Gardens, in memory of Martha Doan. Doan, a Westfield native who lived from 1872 to 1960, earned a Ph.D. from Cornell and taught chemistry at Earlham College and Iowa Wesleyan College.

By the early 2000s, the area had again succumbed to neglect.

Parks Director Melody Jones recalled her children coming home one day looking like they’d seen a ghost. “They told me they’d found old headstones in the back of the park on Union Street,” Jones said. “So, I started pursuing it.”

The parks department began a beautification effort, recreating the original trail and building a new entrance to the park. Working with the DNR and other groups, the department even used ground-penetrating radar to ensure the original burial sites were not disturbed.

“I think it’s really a nice refuge,” Jones said of the park today, with its meandering trail, 150-year-old cedar trees and trail markers that tell the history of Westfield and the town’s Quaker origins. “It’s the only park that actually tells how we became a community.”