You are at:Home»Current in Fishers»Fishers’ Baney plans Hope for Human Trafficking expo 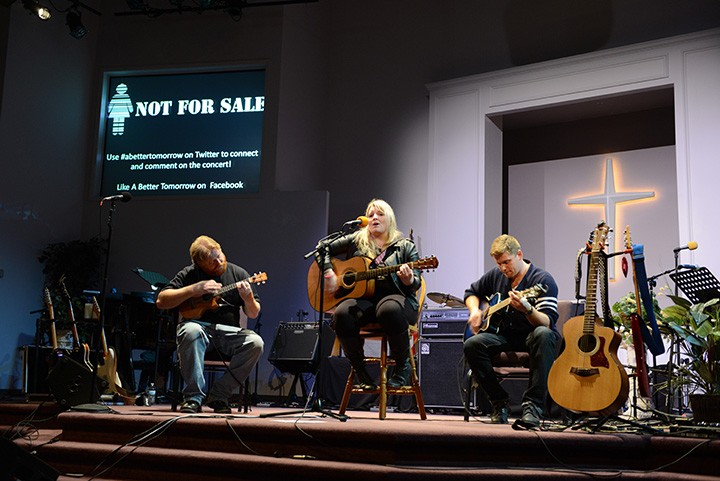 Event organizer Lauren Baney performs during the concert at last year’s Hope for Human Trafficking event, which returns for its third year March 19 at Christ the Savior Lutheran Church. (Photo by Theresa Skutt)

The annual “A Better Tomorrow: Hope For Human Trafficking” education and entertainment event will return for its third year from 11 a.m. to 6 p.m. March 19 at Christ the Savior Lutheran Church, 10500 126th St.

Fishers resident Lauren Baney, a Ball State University senior, founded the free event three years ago after she was inspired by attending a guest speaker event on the topic of human trafficking as a freshman at Ball State.

“I was just so shocked and I knew when I left that building that I was never going to look at things the same way,” Baney said. “When I started talking to people more about it, I realized nobody had really heard about this in Hamilton Co. where we can kind of be in our own little bubble sometimes. I just wanted to do something where people would come out to learn about it and I want people to walk away with knowing more.”

The day’s events will include a fair trade market and fair trade fashion show, live music and entertainment and a series of educational breakout sessions.

“We have things for teenagers up through adults,” Baney said, emphasizing the event’s internet safety education sessions are designed for children as young as fourth grade. “We’ll have breakout sessions with police officers, councilors, lawyers and experts in the field of human trafficking and victim abuse.”

Sarah Hurley will lead a breakout session as well as serving as the keynote speaker during the closing presentation beginning at 4 p.m. Hurley is the fonder of Kristy’s House, which serves at-risk girls and individuals who have been trafficked in the Indianapolis area.