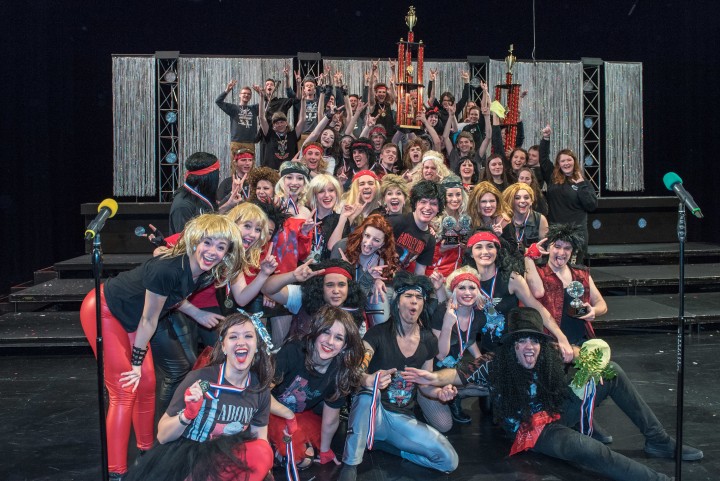 Members of the ZCHS show choirs celebrate top finishes at the Xtreme Choir Showdown in Lafayette. (Photo by Scott Clark)

Working “smarter,” working hard to be a good team, and being “good people on and off the stage.” That’s what Aaron Coates believes makes the Zionsville High School Choralaires and Royalaires Show Choir members so good at what they do.

So good, in fact, they finished their competition season with the Royalaires earning Grand Champion, Best Vocals, Best Visuals and Best Show; the Choralaires winning Grand Champion of the unisex division; the crew winning Best Technical Crew and the Combooo winning Best Band at the Xtreme Choir Showdown in Lafayette.

The accolades followed a performance at the Nashville Heart of America Competition in February that also earned Grand Champion honors.

“Our Nashville trip was a rarity for our program. … We’d prefer to be closer to home so it’s easier on our families,” said Aaron Coates, co-director of the two show choirs. “However, we know that our kids (and organization) enjoy it. We enjoyed the opportunity to see schools’ programs from across the country. It was a great learning experience for our students. For the ensembles to be named Champions of the competition was icing on that cake.”

Other recent honors include the Choralaires being named Grand Champions and the Royalaires 1st Runner Up at the Midwest Invitational in Huntington.

The two choirs are curricular classes, meeting during one period each day. During the majority of the school year, they’ll practice another two to two-and-a-half hours after school.

“During their competition season (January – March) that time commitment doubles to about four to five hours after school,” Coates said. “We also put a bit more time in during the month of May to prepare for our year-end concert finale.”

During the year, the choirs also work with clinicians from around the country.

“These individuals tell me … our kids are special because of their attention to detail, their work ethic – we stress working ‘smarter’ not necessarily ‘harder,’ and their sense of ‘team’ or ‘family,’” Coates said. “We work hard to foster that. We also like to think that we put performance priorities in the right place – stressing singing and musicianship over the other things that can become important in show choir – choreography, costuming, etc.”

He also credits the parent organization – Zionsville Show Choirs, Inc. – with contributing to the choirs’ success.

“The parents involved work diligently to make the kids have an opportunity to be successful,” Coates said. “They fund their staff, they support their experiences, they travel and lend support. We could not pay attention to detail as I mentioned above without their support.”