You are at:Home»Current in Carmel»Carmel proceeds with police headquarters expansion plans 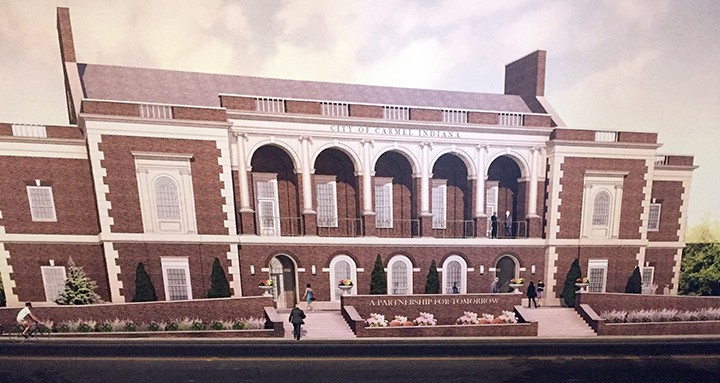 Dan Moriarity, principal and owner at Studio M, has created updated renderings of the new headquarters. (Photo by Adam Aasen)

“I’d like to see it constructed at the latest by the summer of 2018,” Brainard said.

City officials are talking to the local leaders of Huntington Bank, which has announced plans to relocate from its building next to the current police headquarters to a new space on Range Line Road that formerly housed Walgreens.

“We’ve suggested that they speak to us before they list the property,” Brainard said. “We are an interested buyer.”

No price for that building has been released, and a cost estimate for the renovation/expansion of the police headquarters hasn’t been finalized, but Brainard said it’s a necessity.

Brainard said the headquarters expansion could allow the city to create a secure area that could house Carmel’s City Court, which is currently on the second floor of city hall. The idea could free up additional space in city hall.

Brainard also said the city is considering making room for a countywide crime lab instead of having crime labs for each municipality. He said sharing one could allow it to be open for expanded hours and possibly save money.

“It’ll be much needed additional space to expand into,” he said. “I think there’s a number of people who are familiar with the growth here and know that we always planned on expansion one day. Anyone familiar with our operations knows that we need this additional space. Our growth has exceeded what many had expected.”