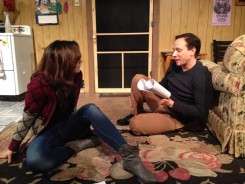 Miranda Nehrig and Jay Hemphill rehearse for the show. “Pornostars At Home” will be on stage April 1-23. (Submitted photo)

In 1975, Leonard Melif wrote “Pornostars At Home” to take a different look at the adult film industry. This year, William Wilkison, director, convinced Theatre on the Square, at 627 Massachusetts Ave., Indianapolis, to allow him to direct the play.

“The interesting thing about the play is it takes a different look at that industry,” he said. “It’s stripped away the ideas that people have about folks in that industry and it puts a very human face and element on the subject matter.”

The play follows four adult film stars invited to one of their co-workers 35th birthday party. The play takes place in Bennett’s apartment and the audience learns the different hopes and dreams about each character and what they want out of life.

“One of the cool things about it is there’s no nudity, but there is adult subject matter obviously,” Wilkison said. “It is something that’s a part of their lives and the play gets into some detail about what they like about the industry, but also some things that are very tragic about industry.”

The play has a PG-13 rating due to adult themes and language. Although Melif wrote “Pornostars At Home” in 1975, some of the elements and issues discussed in the play are still apparent in today’s time.

Wilkison said the play touches on feminism and other hot issues, such as one character who stars in gay adult films but claims he is heterosexual.

“All of these subjects are just as relevant today as they were then,” he said. “I think it’s looking at where we came from and where we are now and those types of things are all throughout the play. I think it’s a relevant play, it’s a comedy drama so it doesn’t take itself too seriously but it packs an emotional punch.”

“Pornostars At Home” will be playing on weekends from April 1-23 at 7 p.m. on Friday and Saturday showings and 4 p.m. on Sundays.

Tickets cost $20 for adults and $15 for students or seniors. For more, visit tots.org.