You are at:Home»Current in Carmel»Carmel Community»Carmel’s Alan Potasnik receives Sagamore of the Wabash award for service 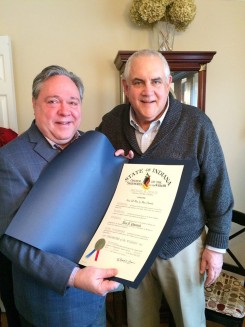 State Rep. Jerry Torr presents the Sagamore of the Wabash award to Alan Potasnik, a member of the Carmel Plan Commission and former member of the Carmel City Council. The award goes to musicians, politicians, activists, local heroes, citizens and more who have contributed greatly to “Hoosier” heritage. (Submitted photo)

Over the years, Carmel resident Alan Potasnik has tried to involve himself in the city as much as possible. He has held positions on the city council, plan commission, board of zoning appeals, the Carmel Symphony Board and worked in a bookstore at the Carmel Clay Public Library, just to name a few.

On Valentine’s Day, he was recognized for his commitment to the city when State Rep. Jerry Torr presented him with the Sagamore of the Wabash Award, the highest award a citizen can receive from the government.

“I’ve felt I’ve tried to give back to the community,” Potasnik said. “When I moved to Carmel 40 years ago, it was such a different community than it is today, and I happened to move here and get involved at a time when the shape of the community was just taking place. It was moving from a rural type of setting to what it is today.”

Torr attended a family gathering and presented the award at the occasion.

Potasnik credits Carmel Jim Brainard in transforming Carmel into the city it is today.

“I think Jim Brainard has done a magnificent job. I don’t know how else to put it. What we see now are the fruits of his labor,” he said. “This is a vision he had, and everything from Keystone Parkway to going out on a Saturday and the farmers market and just the way the city looks now, it’s tremendous. The quality of life that residents have in Carmel is tremendous, and that’s what I love seeing. I love going to these things and seeing people enjoying themselves with these amenities. It just makes it feel that we are special.”

Potasnik said he feels he’s lucky there’s a place like Carmel for him to serve.

For more on the Sagamore of the Wabash award, visit www.in.gov/portal/files/Sagamore.pdf. Other recipients include Ryan White, Jeff Gordon, David Letterman and Raju Chinthala.