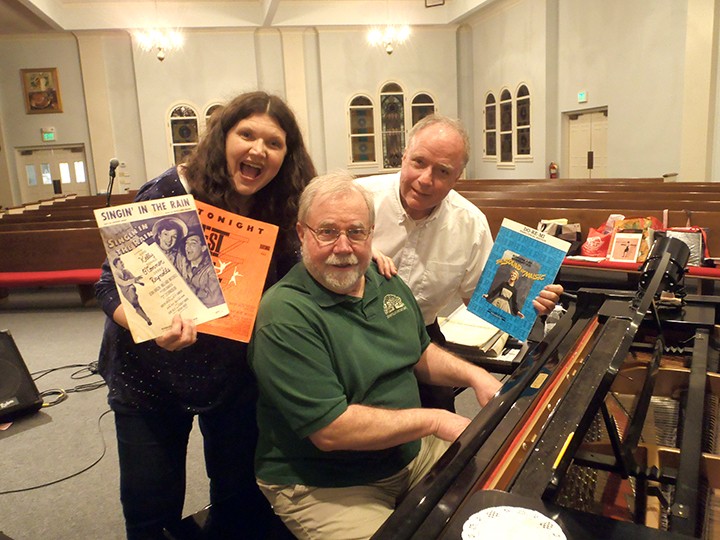 Kathy and Tim Haines like a Broadway tune and they figure so do you.

The husband and wife vocalists, who call themselves The Music Book, will hold a Broadway Sing-along at 3 p.m. April 17 at Zionsville Christian Church, 120 N. 9th St. Steve Jones, the ZCC music director, will serve as pianist.

“We want everyone to sing along on every song,” Kathy said of the free event. “We’re going to do a wide variety of songs.”

Kathy said they were inspired by a trip made to Tanglewood Festival in Lenox, Mass., a few years ago, where a Broadway sing-along was held.

The songs will come Rodgers & Hammerstein musicals, “The Sound of Music,” “Oklahoma,” “South Pacific” and “Carousel.” They also plan songs from “Rent,” “Wicked,” and “Guys and Dolls.”

“We’ll have about 30 songs and we’re working on have melodies where we group them together,” Kathy said.

Kathy said they plan “A Chorus Line” dance for the song “One.”

“Anyone who wants to come up we’ll have a chorus line across the stage,” Kathy said.

It’s not a requirement the audience

“Some might come because they enjoy listening to the other people sing,” Kathy said. “More than one person has made the comment that they might lip sync.”

Kathy and Tim, former Zionsville residents, will perform a Tony Bennett tribute July 24 at Lions Park in Zionsville. They also will perform at Indiana State Fair in a Bicentennial tribute on Indiana composers Aug 13 in the Family Home and Arts Building.

Kathy, 61, and Tim, 67, split time between Indianapolis and Leavenworth. Their daughter, Sarah Salas, lives in Zionsville. Their other daughter, Rebecca Pearish, lives in Vermont. Both their daughters graduated from Zionsville Community High School.

Kathy is a trained opera singer and has performed through the years.

“My husband has very nice singing voice but had never really performed,” Kathy said. “After he retired he joined me in my singing.”